June 8, 2006
Opinions expressed by Entrepreneur contributors are their own.

Is it a knockoff of the PT Cruiser? That's the question that has swirled around Chevy's new HHR hatchback in the auto press. I say, who cares? There's certainly room for several funky little runabouts like this on America's roads. Maybe every manufacturer should even be required to build one or two.

The HHR is a neo-retro sub-$20,000 wagon with a design derived from the 1949 Chevrolet Suburban. I have no idea what the '49 Suburban looked like, but one can presume it was long and tall and ungainly. The modern take looks sorta cute, sorta homely, with a bit of gangster chic thrown in. What makes it a winner is its usability. The HHR has a flat tailgate like an SUV, convenient for loading stuff in and out. The back row of seats folds flat and so does the front passenger seat, for long items like skis or a surfboard or a ladder. The floor in the cargo area can be propped up to serve as a temporary shelf while you're fishing around in the bins beneath. The external flair and internal practicality make this a car likely to appeal to young dudes cruising for thrills, families bored with bland, conventional wagons, and even boomers who need a set of wheels for the beach house.

Once you've resigned yourself to the looks, the only other adjustment is getting used to a few unconventional cockpit features. The captain's-style front seats are high, which makes the shifter feel low. I found it awkward at first to reach down, rather than out, every time I handled the manual five-speed--but I quickly adapted. The power window switches, instead of residing on the doors, are centered beneath the dashboard, another oddity that grew on me. Quirks like this might seem weird in the showroom, but as I drove the HHR they seemed to add to its freshness. Besides, the rest of the package is appealing for an inexpensive getabout. The HHR isn't big overall, but there's lots of headroom, and big windows mean visibility is great. The two engine offerings are peppy for a compact car, and the HHR's handling feels sportier than it should for something that looks like a transformed hearse. You could argue that Chevy is late to the PT party, but the party just got a lively new guest. 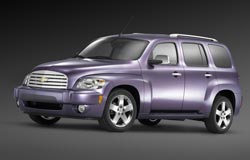 NITS: The armrests on the front captain's chairs are cramped. I'm average size but found my right arm spilling onto the armrest on the passenger side.

GIZMOLOGY: One reason the price is right is that Chevy seems to have contracted for the cheapest plastic on the market for the climate dials and other dashboard controls. Low-grade interior materials are one of the few things that make the HHR feel flimsy. I was also disappointed in options like the fingertip radio controls on the steering wheel, which were so small I preferred to reach over to the radio.

KID MARKS: The HHR's practicality makes it a great, economical family car, with plenty of space for kids in the back, big windows for them to look out, and doors they can manage. The only parental gripe: There's just a single cupholder in the back seat, a sure point of dispute once you put two kids with juice boxes back there.

PAIN AT THE PUMP: Low. Mileage ratings range from 22 mpg/city to 30 mpg/highway. The HHR ranked 451 out of 477 on U.S. News's Muscle per Gallon Index. The EPA rates the HHR average for air pollution and above average for tailpipe emissions. Details are at www.fueleconomy.gov.