A symphony on wheels

May 22, 2006
Opinions expressed by Entrepreneur contributors are their own.

When BMW introduced the latest 5 and 7 series models in recent years, there were howls of protest from purists: The design of the rear end was too edgy, the electronics were too complicated, BMW's "DNA" had been compromised. That is a problem BMW won't have with the brand new 3 series. The German automaker resisted the urge to over-equip the 3, and turned out a simple yet sublime sport sedan that never loses sight of the road. There are many worthy competitors in the entry-luxe category these days--and it's getting more crowded all the time--but the 3 remains at the head of the pack. And not because it is the best at everything.

I had the chance to drive either the entry-level 325i sedan, which starts at about $31,000, or the more powerful 330i, which clocks in about $6,000 higher. I chose the starter model, since the true test of a car is how good you can make it while keeping the price down. And that's where BMW's magic is truly on display. The 325, with a 215-horsepower, six-cylinder engine, isn't the fastest car in its price range by any measure; lower-priced sedans like the Nissan Maxima or Honda Accord V-6 will outpace it off the line. But the components of driving-acceleration, shifting, cornering, and braking-are harmonized in the 325 like a string quartet. Unlike many sporty cars, which boast flashy 0-to-60 times but may not necessarily be well-rounded, the 325 offers performance in proportions that maximize enjoyment behind the wheel. The car's power is fully matched by its ability to hold a curve, so you're less likely to end up overexposed on a sharp bend. If you wish to drive sportingly, muscular brakes will back you up. And the six-speed manual on the car I tested conveys a sense of precise control. All combined, this is the Zen-like engineering that BMW's many fans are always raving about.

The 3 series benefits from a kind of luxurious minimalism, too. Most notably, there is no iDrive, the fancy computerized system that controls the radio, A/C, and other functions in the 5 and 7 series. Most of the controls are still manual, which is a relief, since you don't have to spend a couple hours with the owner's manual before getting in and driving away. Brushed aluminum door and dashboard inserts, leather upholstery, and accent lighting create a stylish, urbane interior environment, setting the mood for confident driving. The seats feel as grippy as something from the space shuttle, holding you firmly in place during aggressive lateral movements. And there are airbags in front, on the side, and up above, in case anything goes wrong. This is an ensemble with every instrument in tune. 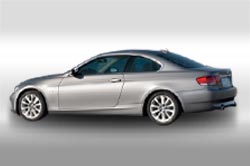 NITS: BMW's cupholders always seem to be part practical joke, and the same is true in the 3 series-where the driver's side cupholder pops out of the dash on the passenger side.

G-FORCES: The entry-level 325 comes with a 215-horsepower inline six-cylinder that has moderate power but is smooth and responsive at every speed. And in combined city/highway driving I averaged nearly 27 miles per gallon, which is pretty thrifty. The upgraded 330 comes with a 255-horsepower six-cylinder. But the magic of the 3 series is in the handling, enhanced by a laboratory's worth of technology in the suspension, steering, tires, and brakes. The bottom line: You will have fun driving this car, no matter how fast you go.

GIZMOLOGY: The radio is a bit complex, and it took a few days of fiddling before I puzzled through all the settings, although standard steering-wheel controls are a handy shortcut. The climate system is more intuitive. Overall, the dashboard controls are forgivingly simple, especially for the technophiliacs at BMW.

KID MARKS: The rear seat of the 3 series sedan can a bit cramped for adults but is right-sized for kids. All the accoutrements are there, too: Cupholders in the center armrest, rear A/C vents, storage pockets, and overhead lights for reading or helping find stuff.

HOT or NOT: Hot. The new 3 is not a breakaway design, but a stylish evolution of the 3's classic curves.

ENIVORNMENT: EPA ratings for air pollution and tailpipe emissions are forthcoming and will be posted at fueleconomy.gov. Mileage ratings range from 20 mpg/city to 30 mpg/highway.

CRASH COURSE: Not yet crash tested by the government or private testing organizations.