October 17, 2006
Opinions expressed by Entrepreneur contributors are their own.
What are the best national parks to see this winter--if you want to go beyond the best-known and iconic Yellowstone National Park? The Coalition of National Park Service Retirees, an organization of more than 540 former NPS employees with an accumulated 16,000 years of national park experience, asked its members for their ideas and came up with this list of seven national parks that range from the well-known on a national basis to the relatively little known.
CNPSR Member Don Castleberry, who retired as Midwest regional director in the NPS, said: "Every U.S. citizen should see Yellowstone National Park in the snowy depths of winter. It is one of the most stirring and uniquely American experiences that you can imagine. If you can't do that this year or you already have visited Yellowstone, the Coalition of National Park Service Retirees has some thoughts about the best of the other national parks to visit--both on and off the beaten path." 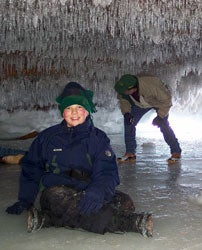 Icy curtains cover walls of red sandstone, frozen pillars mark where waterfalls tumbled from cliff tops and dagger-shaped icicles rise at odd angles from the roofs of sea caves. Wintertime magically transforms the Lake Superior shoreline at Apostle Islands National Lakeshore into a frozen fairyland. The lake surface along the park's 12 miles of mainland shoreline may be covered with ice for some or all of the period from late January to early April. If the lake ice is thick enough, visitors can park their cars near Meyers Beach (about four miles northeast of Cornucopia, WI) and then walk, snowshoe, or ski about a mile along the shoreline to the park's mainland sea caves. When conditions are right, several hundred people a day may flock to the area to photograph the varicolored ice formations and crawl into icy recesses that place them in the heart of the winter. Visitors must use caution, however. Warm clothing is a must. Keep in mind that walking on ice can be very dangerous. Wear sturdy boots, carry a ski pole or walking stick, beware of falling ice, and watch for newly formed cracks or soft spots in the ice. Ice conditions can change rapidly, especially on windy days. People planning a winter trip to visit the sea caves should call the Apostle Islands Ice Line at (715)779-3397 ext. 499, for information on current ice conditions. Visit http://www.nps.gov/apis/ for additional information. 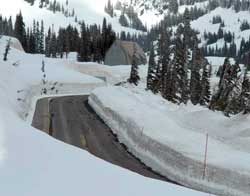 The Paradise area, located on Mount Rainier's southwest side, is a special place in winter. Storm tracks in the northwest bring enormous snowfall to this area, in some years exceeding 1,000 inches of snow for the season. The NPS plows the road to Paradise during the winter months, offering access to a unique winter experience. The park is reached by State Highway 706 from the Puget Sound area. Travel through the Nisqually entrance at the park's southwest corner, continue seven miles to Longmire. From here, the roads winds uphill for 12 miles to Paradise. The road has to be plowed frequently when it snows, so expect that openings may not occur until mid-morning. At times, severe weather may close the road for days. (Call the park's information line at 360-569-2211 for current information.) Come prepared for severe winter weather. All vehicles, even four wheel drive, must carry tire chains. During the holiday season, rangers lead free guided snowshoe walks - sign up when you arrive at Paradise. Rental cross-country skis and snowshoes are available at Longmire. While Paradise is located in a challenging Alpine environment, the surrounding area offers terrain free from avalanche danger that is ideal for beginning cross-country skiers or snowshoeing. Coalition Member Cleve Pinnix, formerly a ranger at Paradise, says: "Contrary to myth, the sun does occasionally shine in the Pacific Northwest! Visit Paradise on a sunny day during the winter season. Get outside on skis or snowshoes, and have a magnificent national park experience." Go to http://www.nps.gov/mora/ for detailed information. 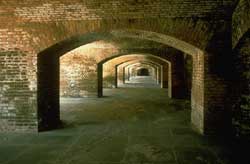 Not all winter national park visits have to involve waist-deep snow and sub-zero temperatures! Discovered first by the Spanish explorer, Ponce de Leon, in 1513 the seven islands that comprise Dry Tortugas National Park lie approximately 70 miles due west of Key West. The early Spanish called the islands the Tortugas because of the abundance of sea turtles that inhabited the area. The "dry" was later added when it was discovered there was no fresh water anywhere on the small islands. Fort Jefferson, a part of the string of fortresses constructed to protect the American shoreline, was constructed on Garden Key in the mid-1800's. It was occupied during the Civil War by Union troops, although construction problems and modern technology -- the rifled cannon that could penetrate masonry fort walls -- ended up rendering the fort obsolete. Dr. Samuel Mudd was imprisoned at Fort Jefferson following his conviction as one of the co-conspirators in the Lincoln assassination. The Fort remained under military protection until 1935 when President Roosevelt, recognizing the value of the pristine reefs, the numbers of sea birds, and the astonishing variety of sea life, declared the fort and the surrounding waters Fort Jefferson National Monument. In 1992, the area was redesignated as Dry Tortugas National Park to protect its priceless natural and cultural resources. Ferry and seaplane service are available from Key West to transport visitors to the area. Fishing and diving charters are also available. Private boaters can anchor in the harbor of Garden Key and enjoy some of the most spectacular sunsets they will ever see. Visit http://www.nps.gov/drto for more information on this unique, seldom-visited national park. 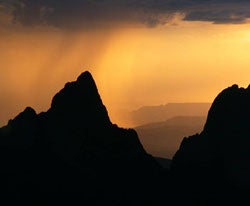 Big Bend National Park is a great place to enjoy temperate weather, great scenery, and a variety of hiking trails. Sometimes considered "three parks in one," Big Bend includes mountain, desert, and river environments. An hour's drive can take you from the banks of the Rio Grande to a mountain basin nearly a mile high. Here, you can explore one of the last remaining wild corners of the United States, and experience unmatched sights, sounds, and solitude. The park has national significance as the largest protected area of Chihuahuan Desert topography and ecology in the United States. Coalition Member Rob Arnberger, a former superintendent of the park, says: "For birders, Big Bend is a great place to build those all-important life lists. Among the many birds native to Big Bend, especially in the fall migrating season and into the winter months include Golden eagle, Peregrine falcon, Elf owl, several species of hummingbirds, Golden-fronted woodpecker, Black-capped vireo, Painted bunting, Hooded Oriole and many, many more." Go to http://www.nps.gov/bibe for additional information and travel planning. 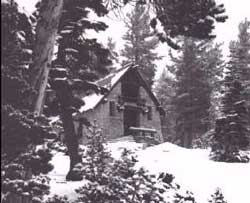 CNPSR Member Rick Smith, a former ranger in Yosemite National Park, says: "For those who want to get away from civilization and are willing to engage in a bit of strenuous activity, Ostrander Ski Hut is a wonderful destination in Yosemite National Park." The Ski Hut is a two-story stone structure beautifully crafted in 1941 by the Civilian Conservation Corp specifically for cross-country skiers. The hut sits in a small glacial cirque at the edge of Ostrander Lake, elevation 8,500 feet - a 10-mile ski from Yosemite's Badger Pass downhill ski area. Very basic overnight accommodations and cooking facilities are available at the Hut, which sleeps 25 people and offers bunks, mattresses, wood stove, a kitchen with a gas stove for cooking and assorted pots and pans. Drinking and wash water is hauled from the lake in buckets; treatment of the water is the individual visitor's responsibility. Light is from solar powered lights. Ostrander Hut is operated by the Yosemite Association, a non-profit educational organization in Yosemite National Park. A hut keeper lives at Ostrander during the winter answering questions, directing traffic and duct-taping broken equipment back together. For Ostrander Ski Hut reservations call 209-372-0740, Monday through Friday 9:00 a.m. to 4:00 p.m. Pacific Time. Visit http://www.nps.gov/archive/yose/home.htm for additional information and trip planning. 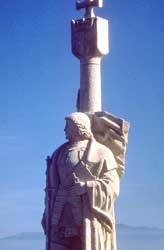 San Diego is a favorite winter destination for millions of visitors but many of these would be surprised to learn that a jewel of a park, Cabrillo National Monument is minutes away from downtown. While comparatively small at 160 acres, Cabrillo has an impressive litany of cultural and natural resources. Named for the Spanish/Portuguese explorer Juan Rodriguez Cabrillo, it marks the site of the first landing of a European on the west coast of what is now the United States. It also boasts the first U.S.-constructed lighthouse on the west coast, now restored to its 19th century appearance. By taking the hiking trail down from the visitor center area visitors will encounter a series of coastal fortifications constructed in the late 19th century through the World War II era. Cabrillo also features a well preserved coastal chaparral ecosystem that provides habitat to more than 300 species of birds. Point Loma is directly on the Pacific Flyway and a great place for birders during fall and spring migration periods. Below the chaparral there exist the most well-protected and pristine tide pools in Southern California, populated by a large number of vertebrate and invertebrate marine animals. Finally, between mid-December and March, it is possible to see pods of gray whales as they migrate from summer feeding areas off Alaska to sheltered bays in Baja California where they mate and give birth to the year's crop of calves. Coalition Member Gary Cummins, former superintendent of Cabrillo National Monument, says: "San Diego visitors are well advised to take in the world famous San Diego Zoo, Old Town San Diego, and SeaWorld, but if they set aside a day for Cabrillo National Monument they will not be disappointed." Go to http://www.nps.gov/cabr/ for further information on the Monument. 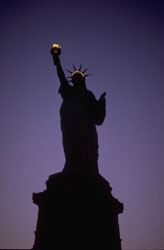 Coalition Member Kevin Buckley, a former Statue of Liberty superintendent says: "To avoid the long lines and have a very enjoyable experience, I would recommend a visit to Liberty and Ellis islands from January through March when visitation is way down." Located on a 12-acre island, the Statue of Liberty Enlightening the World was a gift of friendship from the people of France to the people of the United States and is a universal symbol of freedom and democracy. Opened on January 1, 1892, Ellis Island became the nation's premier federal immigration station. In operation until 1954, the station processed over 12 million immigrant steamship passengers. For the most part travel to the statue is an indoor activity including the ride over on the Circle Line and the tour of the interior of the statue and the Ellis Island Immigration Museum. Go to http://www.nps.gov/stli/ for further information on the Statue of Liberty and additional information for nearby Ellis Island.

The more than 540 members of the Coalition of National Park Service Retirees are all former employees of the National Park Service with a combined 16,000 years of stewardship of America's most precious natural and cultural resources. For more information, visit the CNPSR Web site athttp://www.npsretirees.org.