This story appears in the May 2007 issue of Entrepreneur. Subscribe »

PHIL KNIGHT
Nike
Brilliant branding turned athletic gear into fashion
As a Stanford business student, Knight wrote a shoe company business plan. A few years later, he and a partner started making their own shoes. Celebrity athlete endorsements, plus steady innovation in the shoes' look and performance, propelled Nike to the top. Knight left the CEO job in 2004 but remains chairman. His newest project? An animated movie studio about to release its first feature-length children's film.

STEVE JOBS
STEVE WOZNIAK
Apple Inc.
Made computers suited for ordinary people
The Woz designed the guts of the first legendary machines from Apple Computer, founded in 1976, while Jobs is seen as the master marketer. Jobs also transformed computing, first with the Apple I and again with the Macintosh and its graphical interface, before starting paradigm-busting animation studio Pixar and making digital music mainstream with iPod and iTunes. Now Jobs is taking on telephony with the iPhone.

HOWARD SCHULTZ
Starbucks
Morphed a dull commodity into a must-have status symbol
Schultz came from the Brooklyn projects, started in business selling Xerox copiers and left corporate life to join a Seattle coffee shop chain when it had only a handful of locations. He bought the company in 1987--and today the global chain, with 12,000-plus locations, is renowned for humane working conditions, superb quality control and $5 cups of coffee. His next effort: selling digital music downloads alongside low-fat lattes.

MARTHA STEWART
Omnimedia
Revolutionized home cooking and entertaining
Glamorous enough to spend years as a professional model and bright enough to win a partial scholarship to Barnard College in New York City, Stewart tapped a third talent--unerring taste in cooking, gardening and decorating--to craft an empire that began in 1976 with a modest catering business and made her a billionaire after its public offering. Her next project is a joint venture with a homebuilder to decorate entire subdivisions.

FREDERICK W. SMITH
FedEx
Launched first overnight express delivery service
When Smith bought two small jets in the early '70s, he set out to make cross-country overnight delivery a reality. Few gave his operation much chance of survival, but air cargo deregulation provided an opening in 1977, and his groundbreaking technique of sorting incoming packages at a central facility did the rest. Now FedEx moves 6 million packages worldwide each day, and Smith has moved into printing and copying by acquiring Kinko's.

ROBERT JOHNSON
BET
Founded first cable TV network for a black audience
First black billionaire, founder of the first black-controlled company on the New York Stock Exchange, first black owner of a major sports team--Johnson's firsts reveal why he's such a standout. In 1979, he put up $15,000 to start BET. He sold it for $2.3 billion in 1999 and now runs RLJ Companies, with interests in sports, banking, music and other fields.

STEVE CASE
AOL
Made the internet affordable and easy to use
After starting a tiny online service in 1985, Case triumphed over competitors CompuServe and Prodigy to make America Online the unquestioned leader. The acme arrived in 2000 when Case purchased Time Warner for $165 billion in AOL shares. History's worst annual loss followed--but AOL's innovations, including mailing millions of free software disks and offering flat-rate pricing, changed the internet forever. Now Case has turned his eye to other businesses, including a new payment system called GratisCard that will attempt to rival Visa and MasterCard.

LARRY PAGE
SERGEY BRIN
Google
Revolutionized internet search
These computer science Ph.D. students left Stanford in 1998 to pursue Google, which employed an innovative, sophisticated technique for ranking pages from internet searches. Google has been remarkable for the restrained yet exceptionally powerful way it has commercialized its valuable search page. Now it's rumored to be developing a "Google OS" to challenge Microsoft.

PIERRE OMIDYAR
eBay
Transformed e-commerce with online auctions
Omidyar's 1995 idea for an online auction has spawned the world's largest marketplace and one of the most successful internet companies. But more important than the financial success of eBay, which turned Omidyar into a billionaire, is its impact on countless other entrepreneurs who have crafted viable businesses out of selling on eBay. Today, Omidyar funds organizations and enterprises that promote social change.

BILL GATES
PAUL ALLEN
Microsoft
Dominate global personal computer software
A fortuitous 1981 contract with IBM paid Microsoft royalties on nearly every IBM-compatible PC manufactured. Microsoft shares made Gates the world's richest individual and allowed Allen, though he left the company for health reasons not long after the IBM deal, to dabble in professional sports, space travel and other ventures. Gates, through his foundation, is now becoming what may be history's greatest philanthropist, focusing on global health and education.

RICHARD BRANSON
Virgin
Unending innovation and expansion into new fields
Branson's ventures since 1970 in highly competitive fields including music, airlines, telecommunications, health clubs and, lately, space, have all been characterized by his eagerness to challenge authority, as well as his astute business skills and talent for finding unconventional formulas that usually work. At press time, Sir Branson had received tentative approval from the Transportation Department to launch his U.S. airline. 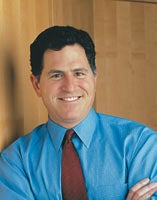 MICHAEL DELL
Dell
Changed the way computers were distributed by selling direct
As a college freshman in 1984, Dell began selling custom-built computers from his dorm room. By focusing on selling directly to customers, Dell became one of the world's largest computer-makers--and Compaq and Hewlett-Packard struggled to compete with the efficiency of Dell's model. Today, Dell has dropped "Computer" from the company name--it's now embracing big-screen TVs and other high-end consumer electronics as well as computers.

BEN COHEN
JERRY GREENFIELD
Ben & Jerry's
Showed that business could be socially responsible--and fun
The childhood friends imbued their Vermont ice cream shop with 1960s counterculture values from the very beginning--and maintained that outlook as Ben & Jerry's grew to worldwide fame, giving back to the community and employees and injecting playfulness with wacky product names. Although they sold the company to Unilever in 2000, their influence continues with organizations like Business Leaders for Sensible Priorities, co-founded by Cohen. 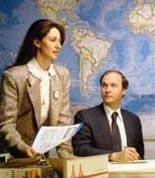 SANDY LERNER
LEN BOSACK
Cisco Systems
Commercialized multiprotocol router
This formerly married couple designed the innovative data switch that helped enable the modern internet so they could share computer files and software between their offices. The firm grew to prominence by the early 1990s, but by then, both had left active management at Cisco. Today Bosack works at XKL, another telecom startup they co-founded, while Lerner pursues sustainable, organic farming at Virginia's Ayrshire Farm.

OPRAH WINFREY
Harpo Productions
Turned a talk show into a media empire
Winfrey survived a tumultuous early childhood to become America's wealthiest black woman and architect of an increasingly powerful business. Winfrey started in TV as a newscaster, where she floundered until finding her niche as a talk show host. Soon she was one of show business's richest entertainers, a success amplified by her hugely influential book club and acclaimed magazine. Today she's bringing Oprah to satellite radio and adding her Oscar-nominated acting talent to a children's animated movie. 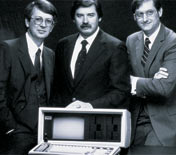 ROD CANION
JIM HARRIS
BILL MURTO
Compaq
Created the world's first portable computer
Canion, Harris and Murto were Texas Instruments engineers who spotted an opportunity in 1982 and began producing portable PC compatibles. First-year revenues hit $111 million. Rapidly incorporating the fastest new processors in their machines kept them ahead of the pack. In 2002, Compaq was taken over by Hewlett-Packard. The founders had been forced out by dissatisfied shareholders a decade earlier, but their legacy of rapid growth and relentless execution lives on. Canion remains active as a venture investor in other technology firms.

GEORGE LUCAS
Lucasfilm Ltd.
Revolutionized filmmaking
Perhaps the wealthiest and most influential filmmaker of his day, Lucas heads Lucasfilm Ltd., a vast enterprise consisting of Lucasfilm, which produces movies and TV shows; all Star Wars licensing; and filmmaking technology enterprises. His most lasting impact is probably the digital technologies he developed, without which modern movies likely would be unthinkable. Also a philanthropist, the multibillionaire recently endowed the University of Southern California with a $175 million gift, the largest in its history.

HERB KELLEHER
Southwest Airlines Co.
Prospered in a tumultuous era with many innovations
Kelleher led Southwest through one of the most challenging eras any industry has experienced while notching 33 straight years of profits. Southwest innovations include no-frills service, generous employee profit sharing and Kelleher's legendary man-of-the-people behaviors, such as pitching in to load luggage or clean aircraft. Kelleher is still executive chairman at what is now one of the largest U.S. airlines.

LARRY ELLISON
Oracle
Pioneered relational database software
Ellison's grasp of the future importance of relational databases, which allowed users to extract information without heavy-duty programming, drove him to start Oracle in 1977 with a $2,000 stake. In addition to becoming one of the world's richest people, Ellison has earned a reputation for relentless competition and dogged persistence. He's currently occupied with philanthropy and increasing Oracle's market share by investing in startups, including small-business accounting provider NetSuite. 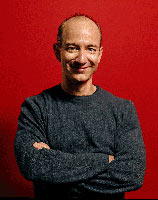 JEFF BEZOS
Amazon.com
Became the first successful online retailer
Convinced as early as 1995 that the internet would become a huge commercial channel, Bezos carefully studied a score of industries before settling on books. Amazon.com grew quickly from the start, and despite criticism, Bezos focused wholly on fast growth. Today, Amazon.com sells more of many products than any other online retailer, while its canny founder turns part of his attention to space travel.

Question: Did your favorite entrepreneur not make the list? Tell us who's rocked your world over the years.