Start a Business, Save the World

You don't have to give millions to charity or solve the nation's energy woes to make a change. Read about the inspiring approaches some creative businesses are taking.

These days, when people want to see a change in the world, they're often turning to entrepreneurs to get the job done. Just think about the alternative fuels industry.

So when Craig Walker, 41, and Vincent Paquet, 37, found themselves thinking that every homeless person should have a free telephone number, they decided to make it part of their telecommunication firm's business plan. Even before GrandCentral, a business that offers customers one telephone number that will work on multiple lines including cell phones, began offering service to the public last year, Walker and Paquet teamed up with the city government of San Francisco to offer free telephone numbers to any homeless person needing one.

"You can give a homeless person job training, a hair cut, help them practice doing a job interview, buy him a suit, but if you don't give him a phone number to hand out when he shows up to an interview, there's no way for an employer to call him back and tell him he's got the job," says Walker. "We spend hundreds of millions of dollars trying to help the homeless, but that last little bit would make it so much more valuable."

As GrandCentral expands its base of subscribers around the country, the company is also extending its charitable program. Walker says that women who flee home because of safety issues with nothing but the clothes on their backs, as well as any victims of a future Hurricane Katrina-type episode, would benefit from a free telephone number. It's amazing the government or AT&T hadn't thought of doing this already, he adds.

Doing Good Goes Mainstream
While Walker and Paquet's idea may be unique, the concept of businesses "doing good" certainly isn't. It's becoming the norm for every business, big or small, established or startup, to make improving the world for their customers and employees part of their business plan.

In fact, it may soon be odd if a company isn't trying to contribute to the social good, says Bruce Piasecki, author of the recently released book, World Inc. "If you're going to be a global company, you have to go green. When you look at a recent cover of Sports Illustrated, where they're talking about how stadiums are addressing the need to be more environmentally responsible, you can see that it's already gone mainstream. It's no longer a choice; it's a competitive necessity." 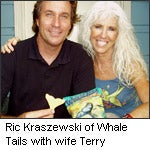 The hunger to create a legacy of goodwill is what motivated Ric Kraszewski and Rick Grant when they first thought of Whale Tails tortilla chips several years ago. The two best friends, pals since fifth grade and now both 54 years old, were sitting in a truck and listening to the radio several years ago while taking a break from surfing. They were munching on chips and dipping them in guacamole, discussing the majestic beauty of the waves when the David Crosby song, "To the Last Whale," came on. Kraszewski thinks it was Grant who first suggested that if their chips were in the shape of a whale tail, they would be perfect for dipping.

Kraszewski, meanwhile, was fretting over the more serious issue of what to do with their lives. This all led Grant to suggest that they begin making whale tail-shaped tortilla chips and donate a percentage of the profits to ocean conservation.

In February 2006, they trademarked the name and started creating a business they hoped would follow the model of Newman's Own and Ben & Jerry's. The chips are so far available in about two dozen Whole Foods stores in Southern California and Redmond, Washington; several other independent stores; and some aquarium cafeterias and gift shops.

Kraszewski says that so far, only $1,000 has gone to ocean conservation, since in the last year their startup has made $259,000 in revenue, which, of course, isn't all profit. But the duo has made sure the money went to something meaningful to them, rather than a nonprofit's administrative costs. They diverted it to a nonprofit in Magdelina Bay in Baja, Mexico, where it was used to buy a boat for a local who measures the water quality of the bay, which is home to many gray whales.

Meeting Consumer Demand
So why are so many entrepreneurs coming to these conclusions now? It may simply be a new generation's way of thinking, a feeling that for too long businesses have had a reputation for only caring about the bottom line, when the bottom line is really something beyond just making money.

But there's also the consumer to consider. "There's been a sea change in values in terms of what consumers want," says Piasecki, also president and founder of the AHC Group, an energy and environmental consultant to companies such as Toyota, BP, Chevron, DuPont and Dow Chemical. "In the past, they only wanted cheap and convenience. Now, there's a mounting wave of interest in having it be a superior product, more durable, of higher quality, and they also want it to address some of the critical concerns in their neighborhood."

A company has an edge if its intentions are good, but the product or service still has to be superior or at least equal to its competitors. Walker, the co-founder of GrandCentral, is adamant that if his company is a success, it will be because the public loves the concept and product, not because they offer free services to the homeless. "I don't know if anyone would want to choose an inferior service for themselves because a company is doing some good works," he says. "No one's going to buy the three-wheel car, because the company donates to Greenpeace." 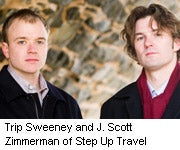 Satisfying customers while improving the world is what the owners of Step Up Travel, LLC are aiming for. The Washington, DC-based company is a full-fledged travel agency that will help patrons get anywhere they want to go, although they're committed to finding socially minded consumers who want to steer their tourism dollars to third world countries. If the idea of going on a nature tour of Madagascar or taking an art class in Peru while renting a house there is more appealing than staying at a Holiday Inn in London, then this is the travel agency for you.

The business was conceived by two medical students, Trip Sweeney, 28, and J. Scott Zimmerman, 31, who are currently on sabbatical from their studies to get the company going. They were both training at a hospital in Brazil when they came up with the business idea. They noticed a lot of people needed help, not just in the hospital, but outside of it as well.

"It's not just patching up the wounds and stitching patients," says Zimmerman. "When you're a doctor in a hospital, it's kind of like a doorway to the culture. You learn a lot about what's going on in the community when you treat drug dealers who get shot up, to the military policeman who has a bullet in his head, to the impoverished people with larva in their leg."

And Sweeney hasn't seen much difference between being a physician and an entrepreneur. "What's been consistent in our studies and in creating this business is that we're always asking why something works this way, and not that way, and when we need to fix a problem, we create a solution," he says. "You have to be innovative, creative and study your options when it comes to patient care."

That's how Michael Binninger is approaching his business. He owns Java Detour, a franchised coffeehouse chain in 17 locations covering California, Nevada, Minnesota and Wisconsin. When two of his customers--members of the Nevada Paralyzed Veterans of America--approached him with the idea of making his coffeehouse more wheelchair-friendly, he paid attention. 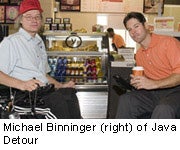 Binninger agreed to spend a day navigating his coffeehouse in a wheelchair to experience the problems some of his customers were facing, and more importantly, to motivate him to do something about it. It didn't take much convincing; Binninger found he couldn't even open the front door to a Java Detour without some serious maneuvering.

So over the summer, his chain will be retrofitting all of its coffeehouses to make them more accessible for customers in wheelchairs. Some of the changes include lowering the menu boards to their eye level, modifying countertops and implementing a hotline to have beverages delivered to car and tables. The biggest expense will be the $1,800 per store addition of a door that will open with the push of a button.

For Binninger, the business decision was a no-brainer. "Will I really sell more coffee," he asks. "Probably not, but I try to step beyond that. It's not all dollars and cents."

In fact, when it comes to improving the world, it's more often dollars and sense.