Should You Care About the Bees?

Though it may not be affecting your business just yet, the mysterious Colony Collapse Disorder has some entrepreneurs concerned.

By Kristin Edelhauser May 17, 2007
Opinions expressed by Entrepreneur contributors are their own.

Honey bees are big business. They're worth about $15 billion in the United States and are responsible for pollinating more than 90 varieties of fruits and vegetables worldwide, especially almonds, apples and blueberries, according to Congressional testimony. But an ailment is threatening their existence, and researchers haven't determined the exact cause. There are plenty of theories, ranging from mite infestations, exposure to chemical pesticides, poor nutrition, bad weather, or perhaps a combination of factors.

It's a domino effect: Once a beekeeper experiences significant losses, farmers who use their pollination services will most likely pick up the extra cost, which could be passed on to the consumer. Third-generation almond grower Paul Wenger of Modesto, California-based Wenger Ranch says he used to pay about $35 to $40 for a hive to pollinate his almonds. But today, he says hives cost anywhere from $120 to $150, forcing him to cut back on the number of hives he uses per acre, risking a weaker bloom.

The mysterious syndrome has been named Colony Collapse Disorder, since some beekeepers across the country reported losing almost half their bee population following this winter. Though sudden bee die-offs have occurred before, beekeepers say they've never seen anything like this year's plummeting number of hives. "There have always been winter losses," says Gene Brandi, owner of Gene Brandi Apiaries in Los Banos, California, who lost 40 percent of his bees this year. "In the 1970s, winter losses used to be around 5 percent or even less. But now it's gotten to the point where if you can keep losses below 20 percent, you're doing good."

What does that mean for his business? Brandi says he took a $100,000 hit from his colony losses. Beekeeper David Hackenberg, of Hackenberg Apiaries in Pennsylvania, reported losing $400,000 in revenue this year. 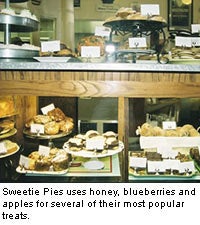 The numbers speak for themselves, but is the media blowing Colony Collapse Disorder out of proportion? Several business owners say they aren't panicking yet, but are keeping the issue on their radar. Toni Chiappetta, owner of Sweetie Pies, a Napa, California bakery, uses honey in her Oak Cakes. Right now, she pays $140 for five gallons of honey. If honey prices increase, she doesn't see any alternative. "I don't have any other choice," she says. "The Oak Cake uses honey and yogurt, and it's extremely popular. If prices do go up, I might have to buy honey in smaller quantities." As for other fruits, such as blueberries, used in her creations, Chiappetta says she couldn't live without them in the summer.

Others don't think the bee syndrome will affect their business at all. Guillermo Payet, president of Local Harvest, a cooperative of farmers offering various honey-related products, says he thinks the problem is being exaggerated. "People are freaking out too much," he says. "Things like this have happened before. I don't think we really risk bees going extinct." Monica Schenk, of Monica's Pies in Naples, New York, says she hasn't been affected yet and doesn't anticipate any changes in the near future.

Bruce Boynton, CEO of the National Honey Board, agrees that consumers shouldn't be too worried about the price of honey increasing just yet. "We haven't seen an extreme change in prices, and that's largely due to the fact that in the U.S., more than half the honey consumed is imported from China and Argentina," he says. "It's a world-supply situation, not only affected by things like CCD, but weather conditions and the world market." 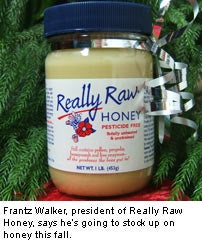 But some entrepreneurs are a bit more concerned. Frantz Walker, president of Baltimore-based Really Raw Honey, which packs honey directly from hives, says he's worried about the future of his company and is planning ahead. "I'm going to use as much of my budget to buy as much honey as I can get this fall, because we don't know what's going to happen next year," he says.

While researchers look for answers, beekeepers and business owners who rely on their services will have to wait and see what this fall will bring. But if Colony Collapse Disorder combines with poor weather conditions, like drought, next year's winter losses could find more beekeepers out of work and some businesses scrambling.