A customer's praise could be your flier's best headline.
Next Article
Jerry Fisher
Magazine Contributor
May 1, 1999 7 min read

This story appears in the May 1999 issue of Entrepreneur. Subscribe »

If there's a single solitary soul out there who loves your product or service and is willing to express that feeling for publication, you not only have a valued testimonial but combustible material for a powerful ad. So while I'm forever beseeching readers to harvest their customer base for testimonials and to sprinkle them liberally throughout ad materials, don't fret if you haven't already done that. Another approach is to get the consent of just one enthusiastic client to reprint the good things he or she has said about your company. Then give those comments the lead role in your advertising.

That's my message to Susan Justice of Woodacre, California, who wrote recently. Justice, co-founder of OneSpirit Healing Arts Center, is a certified clinical hypnotherapist who specializes in health issues, emotional problems and spirituality. Her current flier-brochure leads off with her specialty--hypnotherapy--as a headline, but it's not done to the flier's advantage. I say this because hypnotherapy is still controversial to many, and perhaps misunderstood by others. So it behooves Justice to first entice prospects with the benefits of her therapy before she tells them about the means by which they're attained. And perhaps the most credible way to do that is through the testimony of someone who's experienced her service firsthand. Hence my thought about using a testimonial to lead off this advertisement.

As an example of the power of a tossed bouquet, I often cite the testimonials that accompanied two educational products that came on the market about 10 years ago. One's called Where There's a Will There's an A--a system to help students develop better study habits. The other is Hooked on Phonics, a program that gives little kids a leg up on elementary language formation. The companies that created these products put out a few great TV commercials, each concentrating on real-life testimonials from parents and children. The customers' unvarnished feelings, expressed in the most genuine, honest and heartfelt way possible, were the real power of these spots. Could anyone possibly say no to sincerity like that? Apparently not, because both products were still selling rather well the last time I heard.

So the burning question is, How do you carry that kind of feeling from an animate medium--television--to an inanimate one--the paper flier? The answer is to turn a poignant testimonial into the headline on your flier. In Justice's case, I went to one of her brochures and plucked out a gem that seemed to meet the criteria: a genuine, honest, heartfelt expression of appreciation from one of her clients. I excerpted the most evocative phrase I could find and made it into the following headline: "She helped me (to) heal myself, body and soul."

That's a pretty profound message, and it would surely be the inducement for a prospect to call for more information. After the proposed headline would come a subhead that reads "You, too, can awaken your own remarkable healing power when you put yourself in the hands of therapist Susan Justice." Then I would stick with the impressive bullet points Justice used to describe all the desirable benefits of her therapy. This, combined with the warm, attractive photo of the proprietor, makes for evocative advertising.

But one caution for Justice: A wonderful quote and strong advertising message can be undone by even one careless, but obvious, typing mistake. In her second bullet point below the original headline, she didn't notice that the lead-off word "Renew" was spelled "Nenew" so that the phrase reads, "Nenew your confidence," etc. One such error can taint the impression this advertisement leaves with readers. It's a bit like finding a fly in your soup. It spoils the whole bowl for you. This is especially true if, as is the case with Justice, you're advertising a professional practice. Professionals like doctors, lawyers and therapists are held to a higher standard than other businesses. So a misspelling, particularly one that's so noticeable, prejudices readers right from the start. If you're lucky and it doesn't completely alienate them, you're still saddled with a minus in the readers' eyes that will have to be compensated for with other pluses. You don't need or want any such detraction to dilute your advertising effort. So, please, always use your computer's spelling checker to scour your copy for errors that are so easy to overlook. 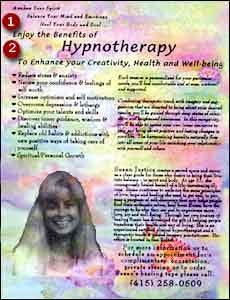 This flier gives off warm fuzzles, but the headline may cause reader to be wary.

1. This headline may turn off the uninitiated. It's better to lead with a benefit.

2. the second bullet point begins with a pretty egregrious typo. That, too can be a turnoff. 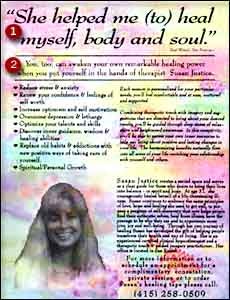 This version hits readers between the eyes with the benefits of the therapist's skills.

1. A testimonial headline, if it's credible and conveys a highly desirable benefit, can't be beat.

2. The subhead gives readers a bridge from the headline message to the body copy.

Jerry Fisher is an advertising copywriter, consultant and author of Creating Successful Small Business Advertising ($39.95), available by calling (800) 247-6553. If you'd like Jerry to consider your materials for a makeover in this column, send them to "Ad Workshop," Entrepreneur, 2392 Morse Ave., Irvine, CA 92614, or e-mail him at Jerry228@aol.com

Q: I own a small mail order jewelry company and really can't afford to do anything other than small-space advertising. But my current ad is not getting results, and I wonder just how big a chance advertisers like myself have in terms of getting noticed?

A: You raise a valid concern: visibility. Is your small ad getting noticed in the shadow of all the larger, more visible advertising that dominates? The answer is that, amid all the Goliaths, your David-sized ad can get attention. But you have to work harder at it than the guys who take up all the space.

They rule by girth; you respond with guile. They shout, you yodel. And that means, as I've said many times, you have to break the mold. When you create a piece of advertising that looks and reads like a lot of other ads, then you've produced, in effect, invisible advertising. That means the average reader, inured to the intrusion of advertising, is unlikely to notice your ad as he or she cruises through a publication.

It's similar to how we zone out when commercials interrupt our TV viewing--unless they break the mold. Think about your own reading and viewing habits and the percentage of ads you actually pay attention to. Ten percent? Twenty percent? Even those figures may be generous. But let's be optimistic and say you actually read or watch 10 to 20 percent of the ads you're exposed to. That means the remaining 80 to 90 percent are virtually invisible to you--a body of advertising effort representing a lot of blood, sweat and tears, not to mention money, all for naught. And frankly, these ads are not just produced by the inexperienced. A lot of polished and professionally produced ads for cars, banks, computers, food, clothing, electronic equipment, and many other products and services might as well have never been produced for the amount of attention they get.

Truly memorable and riveting advertising images have one thing in common: They break the mold. They look different. They sound different. They approach the reader in an unexpected way. But they're not irrelevantly different. That's a big distinction. You still need to appeal to the reader's self-interest as the first order of business in any piece of advertising.

It's how you address that requirement that matters most. The ad shown in this month's column with the dominant testimonial is just one way to get the indifferent reader to cock his head and pay attention. There are innumerable other ways waiting in the wings (your subconscious) for you to bring out onstage.