Avast, ye mateys! These entrepreneurs have turned their pirate dreams into treasure.

Many like to credit Johnny Depp's inimitable turn as Captain Jack Sparrow for bringing back pirates. We, however, would like to point some fingers at Mark "Cap'n Slappy" Summers, John "Ol' Chumbucket" Baur and Dave Barry -- yes, that Dave Barry. 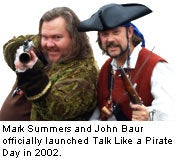 See, Summers and Baur like to talk like pirates, and in 1995, they dedicated a day--September 19--to doing so and selected Barry as the day's spokesperson. When Barry found out about his role, he wrote a column about it. The buzz grew, and the duo officially launched Talk Like a Pirate Day in 2002--a year before the first Pirates of the Caribbean film was released.

We realize the current pirate trend has Disney written all over it. The first film made $650 million, while the second brought in $1.1 billion, making it the third highest-grossing film ever. Reality guru Mark Burnett now has a pirate reality show coming out this summer. Even pirate costumes are climbing the Halloween charts. In 2005, pirate was the number-five choice for adult costumes and number 11 for kids. Last year, pirate costumes hit second place for both categories.

But once you start delving into the pirate subculture, you'll find that many of today's pirates began their obsession with swashbuckling long before the classic Disneyland ride made it to the big screen. And just like the pirate captains of yore, these are an enterprising bunch, many of whom have found a way to turn their favorite legend into a business.

From dinner theaters and pirate stores to craftsman and even pirate-themed bands, piracy has inspired a bevy of businesses that appeal to the seafarers in all of us.

Take It From the Cap'n .
"To be a pirate captain, you have to be an entrepreneur," says Thomas "Blackbeard" Downey, a leatherworker in San Jacinto, California, who sells his hand-crafted belts, eye patches, gauntlets and baldrics through his website, at Renaissance and pirate fairs, and to retailers. He's got a point. After all, isn't a boss the captain of his own business, supervising a crew of seadogs, throwing any scurvy-ridden bilge rats overboard should they dare to call in sick? 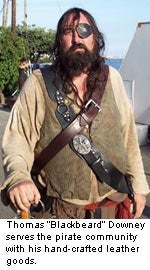 Downey's path to entrepreneurship began with a part-time job at a Renaissance faire in the '80s. Later, he began making tankard straps (hangs ye grog mug from your belt) for extra money on a whim, only to later recall a leather crafting class he took in junior high. Upon that recollection, "The light bulb finally went on [and] the creativity started flowing."

Downey signed on as an apprentice with a master leatherworker in 2001 and started his business soon after. He now splits his time between leatherworking and acting; he played Blackbeard in the History Channel's Return of the Pirates.

Michael Gonzalez also does some acting. You might catch him as an extra in Batman Begins or Deadwood. But his true role is captain of Pirates N Plunder, the Whittier, California store Michael runs with his wife, Bernice. The 3,600-square-foot pirate mecca offers treasures like flags, jewelry, t-shirts, home décor, costumes, games, toys and even hot sauces. "I cautiously boast that we're the largest pirate shop on the planet," says Michael.

Pirates N Plunder was started in October 2004 by a friend of Michael's. Soon after starting to work at the store, Michael became the manager and turned the then half-pirate, half-tennis shoes and Matchbox cars store into the pirate cave it is today. Michael and Bernice bought the store from its founder in December 2006 and are continuing to build the business by revamping the website and holding pirate-themed concerts for kids, as well as a charity signing featuring several Pirates of the Caribbean actors the day after the third film debuts at Disneyland. 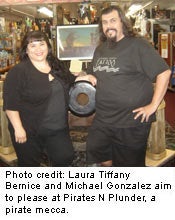 The pirate industry is a small one. Michael cites his network of friends with shops as the main source for finding products. He also says the small pirate world helps with marketing. "There's a lot of word of mouth within the subculture," says Michael, mentioning sites like KeepToTheCode.com and NoQuarterGiven.net and the new Pirates Magazine. MySpace, he says, is also a huge marketing tool for the store, helping him spread the word about events.

It's in Our Blood
The growing pirate obsession isn't limited to paraphernalia. In 1996, Ramon and Antonio Riba, successful theater producers who created shows in their native Spain and in Central and South America, turned their childhood love of pirates into the Pirate's Dinner Adventure in Orlando, Florida. Visitors are treated to both dinner and a full-scale pirate show on a replica of an 18th-century galleon in a 300,000-gallon indoor lagoon. A second location opened in Buena Park, California in 2005.

Michael Mack, general manager of Pirate's Dinner Adventure in Orlando, says the theaters have had double-digit growth since the Pirates of the Caribbean films came out, though they're not worried about a decrease after the trilogy ends. "Pirate's Dinner Adventure has been able to attract thousands of pirate fanatics and wannabes even before the success of the movies," he says. "We did see a significant rise in attendance with the first two films and are looking forward to riding the wave of adventure again this summer."

One Day to Rule Them All 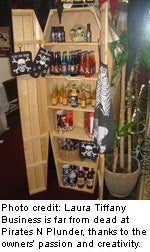 Perhaps one of the more surprising success stories in the pirate world is Talk Like a Pirate Day. It's simple and fun, yet it's unlikely anyone could've predicted the day would become such a phenomenon. Gonzalez says that when he first started working at Pirates N Plunder, about one out of 10 customers had heard of it; now, he says, one of out 10 haven't heard of it. And along with Halloween, it's his busiest time of year.

For Summers and Baur, the day has helped them step out of the mundane. While they're still working at their day jobs, the founders have been interviewed by media from all over the world and have written a book, Pirattitude!: So you Wanna Be a Pirate?: Here's How! (with a foreward by Dave Barry to boot), and two e-books. Baur's family even appeared on Wife Swap, and his wife received her own book deal after the show aired.

"Pop culture always celebrates the outsider--James Dean, vampires, to name just two," says Baur. "Pirates may be the ultimate outsider. They choose to be outside the realm of society. It's that freedom that most people aspire to and that intrigues us about pirates. Doesn't even the most weak-willed, lily-livered conformist secretly wish he could tell the world with all its rules and expectations to go to hell?"