By catering to soldiers and their families, some businesses are keeping both goodwill and profits in mind.

Few people would argue that war is good, but that doesn't mean it's necessarily bad for business. Halliburton, the multinational energy corporation that Vice President Dick Cheney used to head, frequently makes the news for the revenue it's generated from contract work in Iraq. On a smaller level, in Flagstaff, Arizona, controversy ensued when a man began selling war protest T-shirts with the names of dead soldiers on them.

But the benefits to business aren't always so odious.

In 1996, Jason Araghi, now 37 and based in San Francisco, was an American working in Saudi Arabia when his life became even more surreal. He was the managing director of a company owned by a Saudi prince when one of the royal cousins asked Jason if he could help him open a gourmet coffeehouse in the country's capital, Riyadh. Jason invited his brother, Jon, now 43, to help him. The coffeehouse for the Saudi royal family was not only a success, but it also became popular with U.S. troops stationed nearby. Eventually, the military asked the Araghi brothers to create a coffeehouse for its base.

The brothers subsequently started Green Beans Coffee, and their organic coffee and tea was a big hit with the soldiers. As the military operations expanded across the Middle East, Green Beans kept being invited to come along. The company even expanded into the Green Zone in Baghdad, a risky proposition for a for-profit company that finds it challenging to maintain profit margins, since it has to pay a premium for everything from salaries to transporting the coffee. Despite being shot at while traveling in military cargo planes, Jason says there was no way he wasn't going to take his company into the Green Zone and serve the soldiers.

He and Jon, based in London, also have brought Green Beans Coffee to two California locations, near their core customers: military bases. They expect the business to make $20 million this year. Regardless of how much soldiers clamor for their coffee, Jason and Jon have felt guilty at times about profiting from war, especially when Pat Tillman, one of their regular customers, was killed. So Green Beans Coffee began giving two percent of its gross revenue to military charities, mostly to the Children of Fallen Soldiers Relief Fund and Soldiers' Angels, which sends letters and care packages to soldiers. 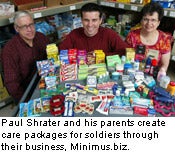 That's where Bakersfield, California-based Minimus.biz, another business connected to the war, comes in. Soldiers' Angels had been spending a fortune on care packages before contacting Paul Shrater, CEO of Minimus.biz, an online retail store that sells kits with travel-size products for college kids, vacationers, business travelers and campers.

Now Soldiers' Angels--and military families in general--is one of the company's largest clients. It's hard for Shrater, who started the company with his parents, not to wrestle with the fact that he's ultimately profiting from a bad situation. Just how much profit Minimus makes, Shrater won't say, nor will he reveal how many employees he has, but the company seems to be doing well. It has a 10,000-square-foot warehouse and is expanding.

Shrater especially felt guilty after another tragic event: Hurricane Katrina. "Our shelves got empty, and on one hand, you feel bad, because you've just sold a bunch of stuff and you wonder if we should have given it away for free," he says. "But then I realized, if we had done that, we would have gone out of business, and then we wouldn't be able to provide these."

Shrater has been able, however, to donate things like space. He allows Soldiers' Angels to house materials at his warehouse for "First Response Backpacks," which are assembled by volunteers and then sent by Shrater's staff to every wounded soldier in Iraq. They've been averaging about 1,000 backpacks per month. 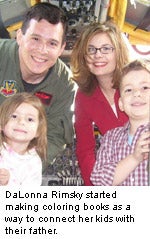 For DaLonna Rimsky, 34, her part-time business has been even more personal. Rimsky, who has a master's degree in elementary education, is a stay-at-home mom in Bossier City, Louisiana with her two children, six-year-old Colin and three-year-old Paige. Her husband, Michael, meanwhile, flies a B-52 for the Air Force. During fall 2005, he was gone for several months, based somewhere near Iraq on a mission for Operation Freedom.

Colin was devastated, crying uncontrollably one day and flying into a fit of rage at school the next. Feeling helpless, Rimsky discovered she could remove the color from family photos using her computer and made a coloring book for her son. Colin suddenly had a tangible way of connecting with his father and began opening up to his mother.

Long before her husband arrived home in early 2006, Rimsky had decided to create a business that would create coloring books from family photos people sent her. The pages would be perforated, so kids could tear out their drawings and hang them on the refrigerator. Three months ago, after consulting a lawyer, designing a site and determining things like pricing for the coloring books, which sell for $7.99 to $10.99, Rimsky launched ColortheMemories.com. 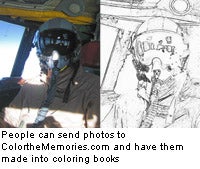 After receiving local coverage from TV stations and newspapers, Rimsky has been averaging one to two orders a day, which isn't a bad way for a part-time mom entrepreneur to start. She believes non-military families will find value in the coloring books as well. "They can help any child who is dealing with a loss or separation," says Rimsky.

People will always have differing opinions about the merits of any war, but there are some universal truths that everyone should be able to agree on. For instance, the world can always use another coloring book.