Wine Without the Vineyard

With options like custom crush facilities, wine lovers don't have to buy a vineyard or build facilities to bottle their own creations.

By Jennifer Grzeskowiak August 15, 2007
Opinions expressed by Entrepreneur contributors are their own.

One of Judd Finkelstein's favorite things about being a winemaker at his family's Napa Valley winery is getting his hands dirty, whether that means picking the grapes, punching down the cap or working with the barrels. But being a winemaker these days doesn't always mean attentively tending to a vineyard--or even being in the same state where your wine is produced.

In addition to Judd's Hill Winery, which produces less than 3,000 cases of wine per year, the Finkelstein family also owns Judd's Hill MicroCrush, a custom crush facility that helps approximately 100 clients make their own wine. They'll do everything from sourcing the grapes from Napa Valley vineyards to designing the label and bottling. In fact, Finkelstein says some long-time clients have never visited the winery. But he also has a client from North Carolina who'll fly to California with 48 hours notice during harvest season, arriving in the "predawn darkness with picking shears in hand." 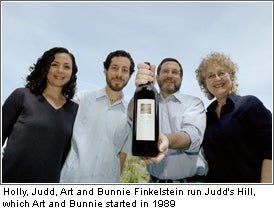 "People have a passion for the art of winemaking and want to be involved in the process," Finkelstein says. Virtual winemaking--making wine without owning a crushing facility--has become a popular alternative. As of November 2006, there were 5,970 wineries in the U.S., with 1,587 of those being virtual wineries, according to Wine Business Monthly. And Provina's $3,499 egg-shaped WinePod, which allows enthusiasts to make wine in their homes, is a bestseller. The 2006 model sold out, and there's a waiting list for the 2007 version.

Alternatives like these are turning winemaking into a more accessible process for Americans, who are embracing wine. "People are realizing it's pretty easy to do," says Paul Beveridge, a lawyer who also has been making wine for the past 19 years and teaches a course on winemaking for busy professionals. "It's like any other art form; you can make it as complicated as you want."

Many ardent wine lovers would never be able to see their name on a label or barrel without options like custom crushing facilities, co-ops that allow grape growers to share facilities and popular winemaking sites, such as Crushpadwine.com. That's because the cost of purchasing a vineyard and building facilities continues to increase. In addition, persevering through the lengthy and complicated permitting process can cause more frustration than a glass of wine can cure. In fact, Beveridge jokes--sort of--that you need to be a lawyer to produce and sell wine.

For Trey Busch, owner of Sleight of Hand Cellars--yes, he named it after the Pearl Jam song--virtual winemaking options allowed him to start his own label by keeping capital costs to a minimum. Busch was working as a winemaker at Basel Cellars in Washington state when he created a business plan for his own winery, which he started a few months ago. "I thought, If I'm going to work this hard, I want it to be for myself," he says. Friends and fellow enthusiasts Sandy and Jerry Solomon agreed to provide the financing and now serve as his business partners. 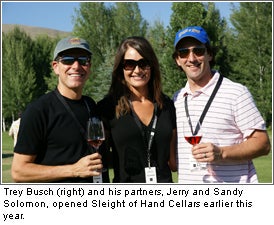 Busch produces two types of wines under the Sleight of Hand label: "negociant" project wines, which are blends of purchased juice that sell for less than $20, and wines made at a custom crush facility from sourced grapes. The negociant wines have allowed him to generate income immediately, since he doesn't have to wait for the wine to age. His first harvest for the custom crush line will be in 2007, and he'll release those wines in 2009. Customers can imbibe at the company's tasting room in Walla Walla, Washington, which also serves as Busch's office. "You don't have to put up a ton of capital this way," he says.

To differentiate his wines, Busch has put a lot of time and effort into marketing. "It's the second most important thing next to quality," he says. "Most consumers are guilty of buying wine based on how the label looks." To coincide with the Sleight of Hand theme, Busch hired a graphic poster designer to create images for the labels based on 1920s and '30s magic posters. His business cards look like a deck of cards on the back, and he hired a magician for the grand opening. 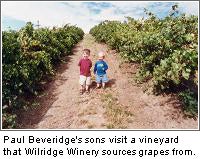 While Busch quit his day job as a corporate buyer at Nordstrom to get into the winemaking business in 2000, Beveridge says giving up your main stream of income isn't necessary. Rather than following the model of "retiring as a wealthy lawyer and purchasing a vineyard," he began making wine when he was a young law associate and has owned Wilridge Winery in Seattle since 1988. He says throughout the years, there have been very few occasions when he's had to take an emergency day to harvest grapes or tend to other pressing matters at his winery, which produces 1,500 cases of wine per year. And aside from grape growers, Judd's Hill MicroCrush counts many business executives among its clientele.

As wine's popularity continues to grow in the U.S., the market for virtual winemaking will likely increase as well. Beveridge attributes a 1991 60 Minutes episode proclaiming wine's health benefits to the beverage's initial U.S. market boost. It was only one year later that Judd's Hill began crushing grapes as a favor to two growers as a way to market their produce to grape-purchasing wineries. Both sides of the U.S. wine landscape have since continued a simultaneous upward climb.

"Wine has always held this mystique as one of life's finer pleasures and people have maybe been a little intimidated by it," Finkelstein says. "Now that we've made it accessible, and more and more people have more disposable income, too, winemaking has become very appealing."

But for some, there's still no substitute for the complete package. "I'm the only person who owns this piece of land," Beveridge says of the vineyard he recently purchased after buying grapes for 19 years. "I'm going to be the only person growing grapes there. And to have total artistic control of the process--that's the ultimate."