This entrepreneur is taking a chance with his Milwaukee board game shop.

By Kristin Edelhauser August 16, 2007
Opinions expressed by Entrepreneur contributors are their own.

Around 7:00 on a summery Wednesday night in Milwaukee, business owner Gordon Lugauer was settling in for a night of gaming with seven other devoted gamers. But they weren't about to play a spirited game of Halo or World of Warcraft. These adult game enthusiasts were sitting around a table with one thing holding their attention: a board game.

Lugauer, who opened The Board Game Barrister in November 2005, says he's been pleasantly surprised to see board games making a comeback, especially with the over-20 crowd. "We thought we'd get more kids and teens coming in, but we haven't," says Lugauer. But the store has drawn a following of adult board-game enthusiasts thrilled to have a local spot to call their own. 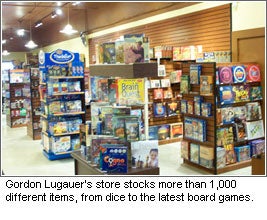 Perhaps Lugauer is on to something. According to market research company NPD Group, board game sales increased 13 percent last year to $802.2 million. But compare that to the sales of computer and video-game software in the U.S., which the Entertainment Software Association says reached $7.4 billion in 2006. When asked whether he feels threatened by the popularity of video games, Lugauer says his store not only competes with video games, but also with movies, skateboarding and any other form of entertainment. While he started playing Dungeons & Dragons at the age of 5, he now prefers the personal interaction of playing board games.

That's why he introduced game nights to the store in January. Lugauer says the response within the first few months was overwhelming, with about 25 people participating each time, playing six or seven games on the 24 feet of demo counters available. Gamers choose from about 300 open games and are welcome to stay until they finish, even after closing time. Lugauer is proud to report that the store has made the "social to-do list" of many locals and become an integral part of the community, something he never imagined when he first dreamt up the Board Game Barrister.

Lugauer, who previously owned computer consulting firm BadgerClaw, LLC, watched his business sour after the dot-com burst and decided it was time for a fresh start. So he went to law school and eventually got married. One day, he walked past an empty storefront and thought to himself, "This could be a game store." Lugauer pursued the idea and realized the plan was actually viable. He and his wife, Alicia, a practicing attorney at the time, figured that selling board games would be much less stressful and taxing than law. But most importantly, Lugauer wanted to find a business that could eventually run itself so he could spend more time with his wife, who has a chronic illness. 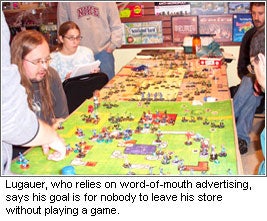 Now the Board Game Barrister has become a family affair; several of Lugauer's relatives are also co-owners. Even his father-in-law has become involved by running the seasonal board game store in Glendale, Wisconsin's Bayshore Town Center. The seasonal shop opens in September, and Lugauer is considering other seasonal locations since the Board Game Barrister does the majority of its sales in November and December. So far, Lugauer says his sales have doubled year-to-date, though he was only able to start paying himself minimum wage at the beginning of the fiscal year.

This serial entrepreneur admits his business isn't all fun and games. "Of course, I could be better off financially working for someone else. But I'm happy doing what I'm doing," he says. "I wouldn't have it any other way." And if the Barrister happens to fail, he'll move on to the next venture. "Money isn't what I'm here for. I want to help people have fun."

Lugauer's Five Favorite Board Games
Though Lugauer says it's difficult to commit to only five favorites, he says these have stood the test of time: