We asked four on-the-go business owners to wear pedometers for one week to find out if entrepreneurs are as active as we think they are.

By Kristin Edelhauser August 21, 2007
Opinions expressed by Entrepreneur contributors are their own.

For New York City restaurateur Donatella Arpaia, walking six miles is all in a day's work. From shuffling between her two restaurants to running on the treadmill, Arpaia averages more than 11,000 steps a day.

But obviously everyone's job isn't as active as hers. For many sedentary workers, walking from the parking lot to the office and from their desk to the bathroom comprises their exercise for the day. To find out how active entrepreneurs really are, we found four of them willing to clip on a Timex pedometer, donated by California-based A Snail's Pace Running Shop, and participate in our informal experiment. Each entrepreneur was asked to wear the pedometer for one week and to keep a journal of their daily steps and meals.

Overall, the entrepreneurs averaged 8,673 steps per day, just short of the average 10,000 steps generally recommended by health industry experts. The best city for walking was, of course, New York City, followed by Bellingham, Washington. Food enthusiast Arpaia topped the chart with an average of 11,200 steps per day and the most steps on a weekend at 27,600. As a non-entrepreneur with a "desk job," my daily average was 3,913 steps. 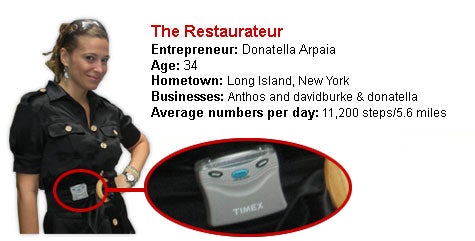 Arpaia swept all categories thanks to her busy schedule and New York City location. This restaurateur says she tries to avoid taking the subway or even a taxi, except during the winter months. Instead, she prefers to bring along her Polo flip-flops to traverse numerous downtown blocks. Arpaia keeps several pairs of heels at both of her Zagat-rated restaurants so she can maintain a professional look once the flip-flops come off.

The entrepreneur, who also recently launched her own collection of artisanal foods and sauces, says her Italian heritage inspires her to walk with friends as much as possible, especially after a long meal. Arpaia adds that the experiment forced her to look at her daily walking and eating habits and will help her make positive lifestyle changes. "Just by logging my daily steps and meals, I've become more conscious of my habits," she says. "But overall, I clocked some good miles." 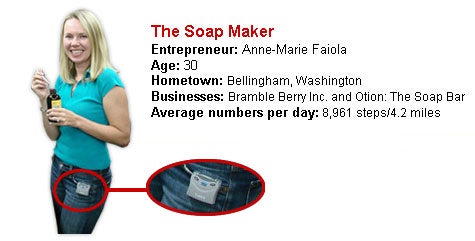 Despite coming in second for the average number of steps walked per day, Faiola says she was surprised at just how little exercise she gets. "I figured since I interact with people so much, I'd log more steps. But I get more steps from my workouts or walking to the bathroom," she says. For this Washington entrepreneur, an average day at her soap-inspired company includes interacting with her approximately 25-person staff, responding to hundreds of e-mails, posting to her blog and coming up with recipes.

But being stuck at her computer makes it difficult to rack up as many steps as she'd like. On the days she does get out of her company's warehouse, Faiola says she hosts classes at her retail store, Otion, in downtown Bellingham. Though she says she won't be able to change her daily routine in the workplace too much, she will continue working out five times a week to stay fit. 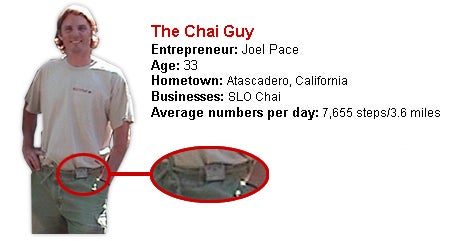 Co-founder and president of fair trade organic tea company SLO Chai, Pace was also surprised to see his pedometer total at the end of each day. "This hit home quite a bit; it makes me want to exercise more," says Pace. This Northern California-based entrepreneur raked in his highest number of steps, 11,649, on a Saturday spent at two farmer's markets in Templeton and Morro Bay. That day, not only did Pace down four chai drinks, but he also logged about 55 driving miles. But that was nothing compared to his next four-chai day, this time on a weekday, when he logged 300 driving miles visiting various vendors and his production facility.

For Pace, his location and that of his vendors makes it difficult to get as much walking in as he'd prefer. But he still finds time to surf at least two days a week, do daily sit-ups and push-ups, and play basketball with friends when he's not busy running his three-year-old business. 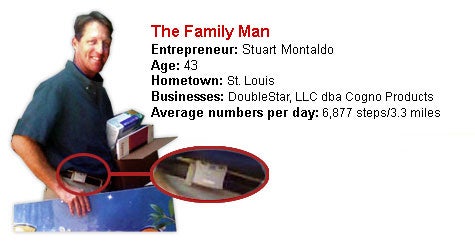 Like Pace, Cogno Products founder and CEO Montaldo experienced his busiest walking day, totaling 11,230 steps, on a Saturday. That day, Montaldo dropped off donated Cogno games at a local school, then worked on a publishing proposal while watching movies with his son. Montaldo strives to balance his work life with his family life. "I don't want to miss a minute of what I think is important with my children," he says. That means a lot of extra steps from his St. Louis office to baseball tryouts, dinner with the family and home for more work. Montaldo, who describes his brand as "Star Wars meets Magic School Bus" targets kids ages 7 to 13 with books, games and puzzlers.

Despite working on the computer for a majority of the day, Montaldo was impressed with his pedometer readings. "I did about three to five times as high as I thought I would," he says. "Between kids, exercise and work, I move around a lot."

From our informal experiment, it appears the most important factor for walking is location. Arpaia had an advantage since she could walk one mile to work, versus Pace, who had to drive hundreds of miles to reach his vendors. Workout routines were also a factor, since Faiola made up for a sedentary day at her computer by running several miles. Even Montaldo, also stuck at a desk for the majority of the day, found that his family kept him busy during his off-time.

The entrepreneurs agreed that by recording their daily steps and meals, they became more conscious of their habits. Even if your business demands plenty of time at a computer, that doesn't mean you can't rack up the steps. Check out websites like Nike's Tune Your Run with Nike+ to help you track your progress, or WalkStyles, a social networking site for walkers, joggers and hikers looking for exercise partners at home or while traveling for business.