Sure, there are plenty of college students that charge $5 for a cup at a keg party. Rarer are the students that see opportunities in their collegiate surroundings and start successful businesses aimed at serving other co-eds.

From the educational to the entertaining, these three companies started by twentysomethings are making it by "real world" standards. Read on to find out what inspired them and whether being a student has been a burden or an asset to their growing ventures. 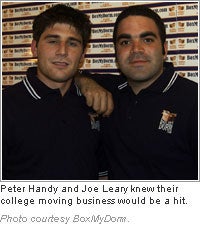 Moving On Up: It was in the back of a dirty U-Haul truck where inspiration struck Joe Leary and Peter Handy. Handy had enlisted the help of Leary and a few other friends to help him move his belongings at the end of his freshman year. They found few options for storing their belongings over summer break and instantly knew they could cash in on helping other students facing the same problem every year.

"We were pretty blown away by the demand that took place our first year," says Handy, who recalls the excitement of seeing the orders pour in slowly turn to fear. "We had to basically close the order process down on the website because we had such high demand. We wanted to make sure we could serve our customers the best we could our very first year."

To prepare for the next year, they hired professional moving companies and launched a new backend of the website to provide better customer service. It was a smart move that helped push their first year's sales of $50,000 close to $200,000 the following year.

Successful Students: According to the trio, being full-time students has actually made it easier for them to run their business.

"Probably the most advantageous aspect of being a student entrepreneur has been being here among our own customers," says Leary. Most students don't know he owns the company, so he's able to get honest feedback from them about what they like and what needs to be changed.

"We get a lot of support from the university, which is very helpful," adds Handy. BoxMyDorm is now the official moving and storage company for the student body at Penn State and serves a select number of other college campuses. But the box doesn't stop there.

"We have a very aggressive growth plan," says Handy. "You'll see us next year in a lot of new places across the country."

My teacher: Archie Jeter is no stranger to Spanish classes. In addition to his college courses in the U.S., he spent a semester abroad in Madrid, Spain. It was in Guatemala, though, where he learned to embrace the language. 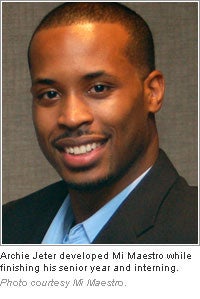 "There was something special about the immersive style of teaching that takes place in Latin America," says Jeter, who spent two months in Guatemala before his senior year. "I saw how much everyone enjoyed learning--and how fast they learned Spanish."

As a self-described "internet nerd," Jeter began wondering how he could connect people in the U.S. that want to learn Spanish with the unique learning opportunities in Latin America.

The answer was Mi Maestro, a site that provides live, one-on-one tutoring with a native speaker located in Latin America. Mi Maestro students book the classes based on their own schedule and click on a link when they're ready to begin the lesson. Once inside the virtual classroom, they have access to a chat feature, an interactive white board and a video window where they can see and hear the tutor in live video and audio.

Double Duty: Jeter wrote his business plan, pitched the idea to investors and analyzed the Latin American market to choose the best location for teachers--all while doing an internship and completing his senior year in a master's program at Florida International University.

"It was what I wanted to do and I had a lot of passion for it, so I made the time and made it a priority."

Final Connection: For Jeter, learning Spanish from a native speaker is crucial to fully understanding the language. "Learning a language is more than just learning words or grammar; it's actually learning the culture," he says. "Through Mi Maestro, you're able to make a real connection between the two."

Wearable Wit: What began as a fun side business for Ricky Van Veen, Josh Abramson, Zach Klein and Jacob Lodwick is now a successful company that has people wearing the friends' jokes. The team sat down in March 2004 to sketch out 10 shirt designs with the goal of selling the shirts on CollegeHumor.com to fund the then-fledging site. The funny T-shirts were an instant hit with the CollegeHumor fan base.

Tees with 'Tude:BustedTee's shirts range from the topical--"Leave Lindsay A-Lohan"--to the old-school, with inside jokes only their targeted age demographic would understand. A picture of a Nintendo cartridge that says "Blow Me," for example, is only funny for those who owned a Nintendo and remember having to blow the dust out of the cartridges to make them work.

"Culturally speaking, our humor is very on point with our age demographic, which is 18 to 28," says Josh Mohrer, director of retail.

That sort of focused marketing is what makes BustedTees so successful--not to mention they're just plain funny.

Graduation: BustedTees now sells about 1,000 shirts a day and can be found in retail chains like Urban Outfitters. But it was the acquisition by IAC last year that really pushed the small side venture into a bona fide company.

"Despite being owned by this big company, we've really retained our personality in a big way," says Mohrer. "This company has always been run by and for 20-year-olds, and to change that would be a mistake."