These 3 companies from across the globe are creating products specifically intended to help developing countries.

January 21, 2008
Opinions expressed by Entrepreneur contributors are their own.

With R&D departments, financial backing and forward-thinking leaders, businesses are in a prime position to create products that can improve life for people in developing countries across the world.

An increasing number of companies are integrating social responsibility into their business models. According to Julie Pohlig, senior analyst for Vital Wave Consulting, almost all multinational companies--especially in health, telecom and technology--are designing products or exploring new business models specifically for developing-country markets.

But, Pohlig adds, just because a startup is fighting for a good cause doesn't mean the funding will come easily. "Venture capitalists are leery of funding projects outside of geographies they know well," she says. "Very few organizations exist that fund startup projects designed specifically for developing-country markets." 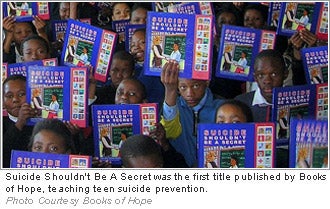 Entrepreneur Brian Julius didn't let that stop him from finding venture capital for his startup, Books of Hope. Though Julius initially funded the business with his own resources, the literacy-focused company joined forces with the Acumen Fund, which invests in entrepreneurial companies helping solve global poverty. "Their support gives us a lot of credibility, and they also have fabulous connections and networking to tell people about what these books can do," Julius says.

The company's products--"speaking books"--are interactive, multilingual, hard-backed books with five-minute recorded sound boxes. Regardless of reading ability, readers can absorb the colorful illustrations and press the button on the keypad to hear a local celebrity's voice read the text in their local language. Titles deal with major health concerns in developing countries such as malaria, tuberculosis, HIV and AIDS. So far, Books of Hope has published and distributed more than 100,000 speaking books in Southern Africa alone.

The company has roots in South Africa, where Julius' partner, Zane Wilson, developed the idea for speaking books to spread healthcare education in areas with low levels of literacy. Wilson, also founder of the South African Depression and Anxiety Support Group, worked with Julius to get their first title, Suicide Shouldn't Be A Secret, in the hands of African teens in late 2005. By mid-2006, Julius opened two offices in the U.S., including his headquarters in Hilton Head, South Carolina, and an office in Washington, DC.

Though Books of Hope won't release sales figures, Julius says the company was profitable within two years in South Africa, and he believes the company will have positive cash flow in the U.S. within two years. The speaking books range in price from just under $9 per book to about $10 depending on the type of batteries used and the quantity ordered.

"We have 10 books in production right now," says Julius. "Our 17th book, on malaria, was delivered last week." Julius says research proves the concept is working. "Typically, about 10 or 20 people view each book that's distributed, though we had one community in Southern Africa where we got an average of 59 users per book."

According to the company, about 90 percent of its business comes from its treated mosquito nets, called PermaNet. Vestergaard Frandsen sells between 3 and 5 million nets every month, at about $5 each. The LifeStraw also sells for about $5 each. In addition, the company produces ZeroFly, a plastic sheeting that people can use as a tarp or tent in emergencies.

At the International Aid + Trade event in Geneva on January 29, the latest addition to the LifeStraw line will debut--LifeStraw family. It has a similar filter to the personal tool, but is larger and has a reservoir holder and tube attached that allows people to filter water for home use.

Lakeland, Florida-based Solicore also hopes to improve life for people in developing countries, but in a completely different way. Solicore, a leader in embedded power solutions, offers ultra-thin flexible lithium polymer batteries for powered cards, radio frequency identification devices and micro-medical devices. The company, which was founded by three entrepreneurs through a merger between Skylab and Leading Edge Technologies, recently partnered with nCryptone to fuel the MaatCard by UNIPAY'S--an acoustic bankcard powered by Solicore's Flexion batteries. 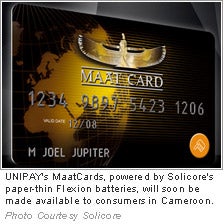 Solicore discovered that a majority of Africans are underserved by traditional banking infrastructures, which has led to the need for mobile banking services for villages and rural areas. The company also learned from a survey by the Consultative Group to Assist the Poor that more than 800 million mobile phones were sold in developing countries in the past three years and that Africa is the fastest-growing mobile phone market in the world. Armed with that information, Solicore has become the sole battery provider for the MaatCard, which is a multi-application, multi-component, multi-channel bankcard.

The card has received approval from the Central Bank of Central African States and is beginning a pilot program with a partner bank of UNIPAY'S in Cameroon. Thanks to the recent launch of the card, Solicore is preparing for expansion this year. "Solicore has experienced an explosive growth in the powered-card segment in the past several months and saw shipments of hundreds of thousands of units," says Solicore CEO Dave Corey. "Solicore is expecting to see shipments in millions of units, which represents 10 times growth."

Follow in Their Footsteps
If these business owners have inspired you to create a product to benefit developing countries, Pohlig offers these key tips: