March 7, 2008
Opinions expressed by Entrepreneur contributors are their own.

They're unfashionable, plain and boring. But for most business people, they're an office necessity.

Whether you've been forced to wear one while attending a conference or tradeshow, or you need one simply to enter your office building, chances are you've worn a lanyard sporting your credentials. Thanks to the prevalence and tackiness of rope lanyards, two sister-in-laws decided to create more stylish, colorful necklaces they named BooJee Beads, after the nickname of one of their children. 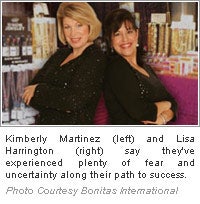 With necklace designs like Twilight (black swirl beads with silver tubes) and Silver Heart (a foil glass heart with silver filigree), company co-founders Kimberly Martinez, 45 and Lisa Harrington, 41, have made it possible for men and women to wear the proper conference credentials while still coordinating with their outfit.

It all started when Harrington dressed up her own identification badge at the Cincinnati Children's Hospital, where she worked as a pediatric nurse. Her co-workers admired her upgraded badge, and soon she began selling them at work, and even hiring her children to help produce them from the basement of their home.

When sister-in-law and business woman Martinez realized the potential of Harrington's beaded necklaces during a holiday family gathering, she took action. "High on adrenaline and Christmas cookies, I put together a business plan on the back of a holiday card envelope and convinced Lisa she needed to free women around the world from the fashion disaster that comes from wearing an employee ID," Martinez says. "We both left our lives of working for others and never looked back."

In 2003, Harrington and Martinez joined forces and created Bonitas International, the company that makes BooJee Beads.

Thanks to her background as a financial services executive, Martinez naturally fit the CEO role, while Harrington's creativity inspired her role as the product visionary and chief design and manufacturing officer.

Today BooJee Beads--named after Martinez's youngest son's nickname, Boojee --are available at more than 3,000 stores and on their retail website. Though Bonitas International launched five years ago with the focus of creating funky, beaded lanyards, they've since broadened their line to include retractable badge reel jewelry, eyeglass jewelry and beaded medical ID bracelets.

But it wasn't always easy for the sister-in-law team. In fact Martinez says it wasn't until 2006 that the company gained its confidence. Martinez and Harrington joined the 2006 Make Mine a Million $ Business contest, sponsored by Count Me In for Women's Economic Independence and OPEN from American Express. Bonitas International was selected a winner. As a result, the company received publicity, coaching, a line of credit, a business loan and access to a network of like-minded business owners.

"The truth is, your family and friends are pretty much obligated to tell you they believe you will succeed," Martinez says. "To add American Express to our list of believers was just amazing."

Based in Cleveland, Bonitas International reported sales of $2 million in 2007. Martinez says the company expects sales to double in 2008. "Our mission is to be the largest provider of innovative identification and related products in North America and Western Europe," Martinez says.

Both women attribute product innovation for their continued success. According to Martinez, more products are on the way, including one that helps kids quickly reconnect when they've lost their parents.

In addition to their creative ideas, Bonitas International also credits their virtual office for assembling the best behind-the-scenes team possible. The company runs out of seven cities across the U.S., in addition to a design studio and a warehouse.

"It has enabled us to recruit and retain best-in-class talent since we didn't have to compromise for the best available person in our market," Martinez says. "It has also allowed our team to more effectively manage their professional and personal lives."

Becoming successful entrepreneurs has certainly had its perks, including traveling to New York to attend the Carolina Herrera fashion show during New York Fashion Week and meeting Vogue Editor-at-Large Andr? Leon Talley. But Harrington and Martinez say the most inspiring part of their experience as entrepreneurs so far has been their projects in South Africa and Haiti.

"We have a new product line for our eyeglass jewelry called A Mother's Promise that is currently made by our beading artists in Guatemala," Martinez explains. "The women are guaranteed fair trade wages, and the proceeds from the work project are reinvested in the community as scholarships for their children."