These adventurers run businesses while traveling the world.

The globetrotting lifestyle is typically exclusive to jet-set, elite billionaires. But as offices go virtual and technology evolves, small-business owners are discovering they too can live out their globe-trekking dreams.

Entrepreneurs already have the flexibility to conduct business when and where they want to. And as organizational psychologist Dr. Billie Blair points out, they also have the key components shared by adventurers across the globe.

Blair, president and CEO of Los Angeles-based Leading and Learning Inc., says that travel is second nature to entrepreneurs because they take a different path than their corporate peers.

"Entrepreneurs are free to follow a non-traditional path. Though they still need to be able to work every day, they do it in their own time frame," Blair says.

For entrepreneur Amanda Freeman, 31, who describes herself as a die-hard traveler, the flexibility of entrepreneurship was an attractive feature. As co-founder of New York City-based Vital Juice Daily.com, a daily health and wellness e-mail, Freeman says she's doing more travel for pleasure than ever before. But, she quickly points out, when she does travel, she doesn't completely shut off her work world.

"Though I control my own schedule, I have more of a sense of responsibility now," she explains. Freeman stays in touch with her co-founder, Lisa Blau, and their full-time staff of three, with the help of her laptop and BlackBerry. The e-mail newsletter, which launched in May 2007, is growing steadily, with 30,000 subscribers so far.

Freeman's recent excursions include short trips to Vermont and Florida, and extended vacations to Abu Dhabi, Dubai, the Bahamas and Aruba. In addition, she's traveled on behalf of her website to both Chicago and Miami.

Globetrotters Garry Jensen, 46, and Elena Bertinetto-Jensen, 41, also found a way to combine a love for travel with the flexibility of owning their business. Their website, Deeply Madly Living.com, and their showroom are based around the treasures they discover while scouring the globe.

Deeply Madly Living.com, which launched in October 2007, features unique and edgy home and décor pieces. Though the Jensens won't release sales figures, they say their sales are on a steady growth path, especially since a recent mention on the trends e-newsletter Daily Candy.

It all started when Garry, a Danish-born former international investment banker, and Elena, an Italian interior decorator and artist, couldn't find the right accent pieces to furnish their New York City loft. So, they decided to fill the niche by scouting international locales to make the latest design innovations available online.

The couple travels regularly to Italy, France, London and Germany. In between, the Jensens make time for indulgent trips to the Caribbean and any historical towns where Elena can observe unique architecture.

"We have to travel for this business," Garry says. "But we love going to different places and exploring."

For Freeman and the Jensens, the opportunity to travel the world before retiring has become a reality thanks to their entrepreneurial ventures. But the under-50 crowd isn't the only group living out the best of both worlds. Baby boomers are also discovering ways to continue working and seeing the world--on their own terms.

When Travel Leads to Business
After retiring in 1999, exploration was the only thing on the minds of Carol and Phil White. Already avid travelers, Carol, 60, and Phil, 66, decided to leave behind their children, grandchildren, and Wilsonville, Oregon, home in 2000 to travel the U.S. via RV for one year. 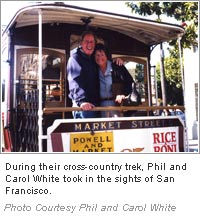 But what started as a personal mission quickly turned the Whites into accidental entrepreneurs. Along the way, the Whites met people who were intrigued with their story and eager to find out how they too could follow their road trip dreams.

When the Whites returned home, they realized the potential for a business encouraging others to explore just as they had, so the couple formed a publishing company, Retirement Lifestyles Inc., launched a website and published a book called Live Your Road Trip Dream- Travel for a year for the cost of staying home. The book--in its second edition--has sold more than 5,000 copies since it was published in 2004.

For the Whites, it's not about the money they make, but the once-in-a-lifetime experiences they've shared. Not only did they check Mardi Gras off their life list, but they also took a canoe trip on the Rio Grande and attended football games at venues Phil always dreamed of visiting.

Now the Whites mix business with pleasure by integrating trips into business opportunities. Last year, for instance, Phil and Carol were named national spokespeople for the Recreation Vehicle Industry Association's "Go RVing" campaign, where they got the chance to embark on a month-long road trip. Carol is also planning to write an article for a grandparenting website on an upcoming trip with two of their grandchildren to San Diego.

"This is such a fun, fabulous time of life. We've explored things we couldn't have even imagined," Carol says.

Finding Balance
A globetrotting lifestyle sounds glamorous. But it's not always easy to balance, especially at certain stages of life.

According to Freeman, constant travel forces you to filter your relationships.

"When your in-town time is limited, you only want to spend time with good friends," she says. "Some friends unfortunately get weeded out in the process."

Freeman maintains a relationship with her live-in boyfriend, who she describes as more of a homebody. Freeman says when he does travel with her, they're on the same page, sharing a love for beaches and luxurious hotels.

In the future, Freeman says, she may have to modify her travel-filled schedule.

"I think it will become more difficult to maintain this pace of travel when I do decide to start a family," she says. "I'll just have to modify it in a way that works with my life."

The Jensens have taken on the challenge of modifying their lifestyle since their recent adoption of a 4-year-old girl, Gellila, from an orphanage in Ethiopia.

"We will have to organize our travel better now with our daughter--it does become a bit more complicated," Garry says. "Right now we plan on taking her with us since she's not missing school yet."

Have Business, Will Travel
Blair predicts all entrepreneurs will need to be well-suited to travel.

"Entrepreneurs need to understand that travel will be a [necessary] component in order to have a successful business in the 21st century," Blair says.

For the Jensens, Whites and Freeman, that shouldn't be a problem.

"Our 'bucket list' for travel is never-ending," Carol says. "We'll travel until we can't do it any longer."