April 22 lasts 365 days a year for these eco-friendly businesses.

These days, it's good to be green.

So much so that companies like Target, Macy's and Dell are marketing eco-friendly products more than ever. Businesses are pledging their allegiance to all things green by promoting Earth Day--which takes place on April 22--just like any other marketing holiday.

Efforts to go green should be applauded, but experts stress the importance of living up to eco-friendly claims.

"Nothing will sink a company faster than the realization by its customers that it's only interested in good PR and not in real change," says Nik Kaestner, founder of Green Squared Consulting.

For companies like Greenling Organic Delivery, TwoGreenMoms and
Dropps, that won't be a problem. These companies are built around products and services that make it easier for consumers to minimize their footprint on the environment. Meet the socially responsible entrepreneurs who are turning a profit while trying to save the planet. 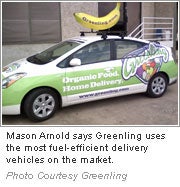 The green lifestyle is nothing new to Greenling Organic Delivery co-founder Mason Arnold. He's been an organics pioneer since graduating from the University of Texas, Austin in 2001. Arnold, 29, created his first business, EarthAction Lawn and Landscape, an environmentally responsible lawn company, in 2002. He sold it two years later to launch Greenling in 2005.

The Austin-based company delivers fresh organic produce directly to customers' doorsteps. Currently, Greenling delivers to Austin and San Antonio, but Arnold says he plans to extend delivery to Dallas and Houston within 18 months. Ultimately, Arnold would like to expand the service nationwide.

"We've developed a system that's a just-in-time inventory, so it reduces the time it takes for food to get from the farm to the table by more than half," Arnold says. "We're delivering a more nutritious product, and we're able to deliver it much faster. We think everyone in the nation should have this available."

Greenling, which had revenues of $1.3 million in 2007, serves about 1,200 residential customers and between 30 and 40 wholesalers.

Though Arnold promotes a fun working environment for his 17 employees, he also practices what he preaches. The company purchased computers from Dell after researching its recycling and conservation efforts.

"We investigate every company we work with to make sure they share our core values," Arnold says. "We've turned down vendors and service providers before simply because they don't seem to share our values of conversation and sustainability."

In addition to providing a service that's good for consumers and the environment, Arnold uses his organics expertise to encourage Austin locals to do their part to conserve energy.

Arnold also formed a private organization, Organic Association of Texas, to give a voice to his industry.

Moms Gone Green
Just a few months ago, Jill Clark and Mandi DuPuy were two moms wishing they could do something to help the environment. Now, they're the co-founders of TwoGreenMoms, a website that launched in February 2008. 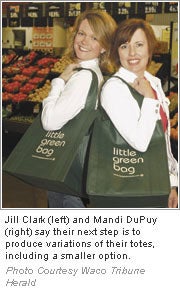 Their product: reusable totes to replace plastic bags. The polypropylene totes are available with or without insulation, in green or blue. The green bag features the saying "Little Green Bag," while the blue bag carries the phrase "Girls Gone Green." In addition to the totes with sayings, TwoGreenMoms also features customization.

The duo decided to create their line of eco-friendly bags to attract women like them who want to be green, but also stylish.

"I wanted a cuter bag than the ones I was carrying," DuPuy says. "You can be a walking advertisement for a grocery store for only so long."

DuPuy, 40, and Clark, 37--who both work out of their Waco, Texas, homes--were friends for seven years before deciding to partner. The idea for the green totes sparked when Clark, who also owns a specialty item company, Kiddoozie, began noticing her clients asking for environmentally friendly products.

Clark, the sales guru of the team, saw the need for the totes and decided to fill the niche. She and DuPuy began giving the bags to friends as birthday gifts.

Much to their surprise, the response was overwhelming, and their close-knit Waco community began spreading the word about their product. This year, based on early sales figures, Clark and DuPuy are projecting $150,000 in revenue.

Not only do TwoGreenMoms want to make a difference in their community, but they also want to have an impact on generations to come.

Eco-Friendly Laundry
Just like TwoGreenMoms, Dropps is offering a product that makes it easy for consumers to go green. Dropps, founded by 52-year-old Jonathan Propper, launched in 2005 with the product Laundry Dropps. This eco-friendly liquid laundry detergent--which was listed in O The Oprah Magazine's "The O List" in May--comes in pre-measured, dissolving packs. 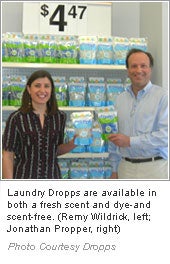 For Propper, a third-generation textiles and cotton-spinning entrepreneur, the evolution of Laundry Dropps started in 1979 when he founded Conshohocken Cotton Co. He developed Cot'n Wash, a concentrated detergent, to care for cotton fabrics.

After his wife complained about measuring liquid detergent and making a mess while pouring, Propper decided to reformulate Cot'n Wash in 2005, renaming it Laundry Dropps. It became the first eco-friendly laundry detergent packaged in toss-and-go packs.

The Philadelphia-based company, which Propper says has fewer than 50 employees, reports sales in the seven-figures. The product is sold by such retailers as Target, Wal-Mart and Whole Foods.

When developing Laundry Dropps, Propper says plenty of thought went into the packaging.

"A lot of products have focused on what's inside the package in terms of 'green.' We also have to focus on the package itself, because that's what can ultimately make the difference in the environment," he says.

To prove what an immense difference Laundry Dropps can make, Propper says the average family could use Laundry Dropps for about 15 years and have the same footprint as one plastic jug of laundry detergent in a landfill.

The company is also doing its part to spread the green message. Remy Wildrick, partner and brand manager, says Dropps is involved in community events and is asking people to submit Earth Day resolutions to their company blog.

"I think everyone wants to conserve and save the planet in some way, but they need tools in order to do that," Propper says. "Dropps is a very affordable, easy way to conserve water, energy, plastic and trees."

How to Lessen Your Carbon Footprint
Even if your company isn't built around a green product, there are still plenty of ways your office can join the green effort. According to Kaestner, the best place to start is with lighting.

"Switch to fluorescents and make sure no lights stay on that aren't needed. Also, tune your heating, ventilating and air conditioning system, install programmable thermostats, and have your utility provider do an energy audit to identity ways you can simplify," he advises.

That's the kind of environment Arnold has created at Greenling.

"Everything that we do, we try to look for ways internally and externally to help guide ourselves, our company and our community to a more sustainable future," he says.