Since we haven't found a way to invent 25 hours in a day, these smart gadgets are the next best thing.

By Rich Mintzer July 22, 2008
Opinions expressed by Entrepreneur contributors are their own.

Magnetic resonance coupling: The words don't mean much to most of us, but for engineers and researchers at Massachusetts Institute of Technology, they could be the beginning of true wireless technology as we've never seen it before, eliminating the need for cables, chargers and perhaps even batteries. The goal is to re-power any low-power device, such as a cell phone, iPod or laptop, by moving into the range of the wireless power source. Wow!

Meanwhile, since this is still in the making, there are several high-tech goodies, besides the iPhone and your trusty BlackBerry, that are generating plenty of attention. Below are five practical favorites in the business community, from some of the major players in their respective industries. 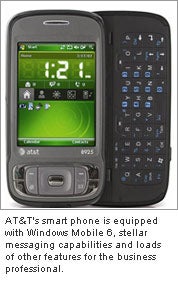 As smart phones go, AT&T's Tilt has generated considerable buzz in business circles over the past several months. The name comes from a relatively simple, but appreciated, concept of a slide-out screen that tilts at a 40-degree angle, giving it a laptop feel and better viewing when utilizing the keyboard. Although not as "trendy" as the iPhone, the Tilt has plenty to offer the business professional, including a host of wireless options through Windows Mobile 6, such as excellent messaging capabilities and push e-mail.

For creating and editing Word, Excel or PowerPoint files, Microsoft Mobile Office Suite is included, and Adobe Reader will allow you to open PDFs. In addition, there's a three-megapixel camera and support for AT&T music and video downloads. While it's not quite as compact as some smart phones, the tilt is sleek and easy to operate and has garnered favorable reviews from business users. 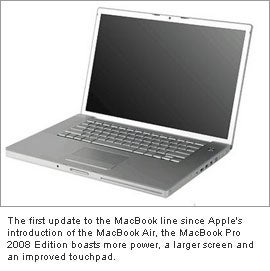 The follow-up to the super-thin MacBook Air, the Apple MacBook Pro 2008 Edition adds more power and a larger screen. New 17-inch models have a backlit LED option, along with Penryn-class Intel CPUs and the touch-pad gestures already featured on the MacBook Air. The newer trackpad allows maneuverability to go back and forth in Safari's browser history or zoom in and out of photos or documents. Such user-friendly additions with the larger screen make the super-lightweight, one-inch-thick Pro a handy office tool. For those with an eco-friendly mind-set, the Energy Star-compliant MacBook line of computers is among the greener models available with less packaging, recyclable casing and mercury-free LCD displays. 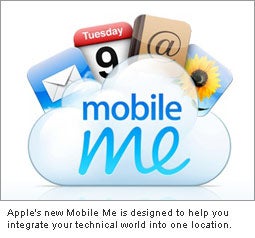 One more from Apple is the new Mobile Me, designed to help you integrate your technical world into one mobile location. Using an online server, you can store e-mail, contacts and calendars and use the "cloud" to update your Mac, PC, iPhone and/or iPod Touch all at once from anywhere. Mobile Me works with Microsoft Outlook (PC) with either Windows XP or Vista, as well as with iCal on Mac. Among other features of Mobile Me, you'll find Gallery, which lets you upload, post, rearrange and title photos in web quality, and iDisk, a file management system with 20GB that can store e-mails, documents, photos and more. You can also drag and drop larger files as e-mail attachments. The new subscription service (as of July 11, 2008) costs $99 for an individual and offers an additional 20GB of storage for $49. 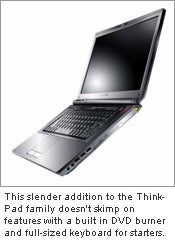 The latest in the ThinkPad series is as thin (.73 inch) light (2.9 to 3.5 pounds) and loaded with features as it gets. Thus far, still sporting Windows XP (whew!), a 64GB solid-state hard drive and plenty of memory (2GB of 667MHz), the new x300 has added a few intriguing features. Along with WWAN connectivity, wireless USB, a built-in DVD burner, keyboard light and GPS, you'll find a noise-canceling digital microphone excellent for web conferencing. Along with features geared for the mobile executive, having a user-friendly keyboard is of primary concern, considering the number of hours one spends entering data. With the same keyboards as Lenovo offers on its 14- and 15-inch models, user reviews indicate great comfort with the non-notebook-esque keyboard. Also of interest to the executive on the go is the ability to increase the three to four hours of the battery life by purchasing a three-cell battery that fits into the drive bay to extend mobile capabilities to a full work day. 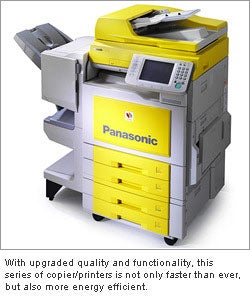 Among the latest entries in the award-winning Panasonic C series, DP-C405S2Y is faster than ever (40 PPM) with the latest upgrades in quality and functionality. Featuring a 15-second warmup time, the C series continues to be especially appealing in an age of energy-saving concerns and powering down when not in use. The smaller, lighter 26.1-by-32.5-by-36.7-inch machines are a welcome change from the behemoths of old, and along with excellent color quality, ease of use has garnered a lot of attention. The SD card convenience is another favorite feature. Load PowerPoint presentations, CDs or other documents from a computer or digital camera and insert the card into the copier, a hassle-free design for a busy business owner.

"For small businesses, companies are making these smaller machines that have functionality far beyond collate, staple and so on," says Larry Wu, senior director of J.D. Power and Associates, which rated the Panasonic color copiers No. 1 in customer satisfaction for 2008. "People want the time-saving conveniences of a machine that can easily save the document and send it to your network e-mail or to a colleague, vendor or customer."

The sleek colorful C-Series models, which debuted in '07, interface seamlessly with a PC and meet the most important criteria of most business owners: reliability, winning the OPA Most Reliable Color MFP award for 2008.

Rich Mintzer is a journalist and author of more than 80 nonfiction books, including several on starting a business and a dozen for Entrepreneur Press. He hails from Westchester, New York, where he lives with his family.