There's a new gold rush in California, but the rush is to the altar. Gay and lesbian couples from any state can come to California to tie the knot. As a result, a growing number of businesses are saying "I do" to the same-sex marriage market, helping thousands of couples realize their dream weddings.

From a Macy's wedding registry ad featuring two men's wedding bands to an Indiana stationery store whose heterosexual owner uses the internet to reach the market, there are numerous styles and approaches to get the lesbian, gay, bisexual and transgender (LGBT) community interested in your products. But experts say there are some key strategies to consider when marketing to the LGBT community.

"Hopefully most of us will only get married once in our lives. Those businesses that service other events in our lives and whatever ongoing consumer needs--that's better," LGBT marketing expert Dana Rudolph says.

LGBT buying power is expected to total $712 billion in 2008, according to a recent study by Witeck-Combs Communications, a Washington, DC-based firm that specializes in the LGBT consumer market. By comparison, the U.S. wedding industry as a whole will ring up an estimated $62.8 billion this year.

According to a recent study by UCLA's Williams Institute, same-sex marriages in California would bring in $683.6 million and generate almost 2,200 new jobs during the next three years, both from 51,000 in-state couples and the projected 68,000 couples traveling to the state to get married. 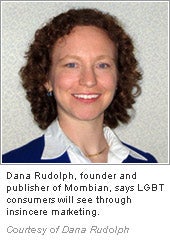 Rudolph holds a history degree from Oxford University and, most recently, was a vice president at Merrill Lynch developing online business and marketing strategies. There, she grew the firm's global LGBT employee network and boosted business among its LGBT clientele.

Rudolph got married in Massachusetts--after it became the first state to legalize same-sex marriage in 2004--to her partner of 14 years. Now Rudolph raises their 5-year-old son and operates Mombian, a cultural, political and lifestyle website she founded for lesbian mothers.

Learning a Lesson From Massachusetts

Rudolph says companies have learned marketing strategies from what worked, and what didn't, in Massachusetts.

"Massachusetts being the first, I don't think as many companies knew what to expect. Now, more are willing to jump in on it--certainly a lot of non-LGBT companies are going to the market," Rudolph says.

California is the first state to offer same-sex marriage to out-of-state residents. Following suit, the Massachusetts Senate voted July 15 to repeal a 1913 law critics said dealt with interracial marriages and was used to keep gay couples from coming to the state to wed. Since 2004, only in-state same-sex couples have been allowed to marry, with some exceptions.

A study by the Williams Institute for the Massachusetts Executive Office of Housing and Economic Development projects that 32,000 same-sex couples will travel to the state to get married in the next three years, boosting its economy by $111 million.

"Just slapping a rainbow logo on something isn't enough--there isn't anything wrong with that, but you have to do more," Rudolph says.

LGBT consumers see through guarded or insincere marketing, she says. When choosing a business, they often look for references, a track record of supporting the LGBT community and a non-discrimination policy.

Make a Connection to the Community

Relaying a personal anecdote on a business website about why that business supports the LGBT community is a good idea.

"But even if you don't have a gay relative or story to tell, it behooves small businesses to do something within the community. Make a connection to the LGBT community," Rudolph says, either through participating in activities, making a donation to the local branch of a national LGBT organization or sponsoring the local high school's gay-straight alliance.

For Twisted Limb Paperworks LLC owner Sheryl Woodhouse-Keese, marketing to the gay and lesbian community has been a part of her philosophy since founding the small, Indiana-based stationery business 10 years ago.

She blended keywords into her website to attract the LGBT community and discovered that those customers--primarily online and from either coast--were finding her because of a prominent environmental message. Having an LGBT-friendly site helped seal the deal. She says her LGBT customers are loyal, patronizing her store for not only wedding stationery, but also other important occasions.

Because of the market's momentum in the wake of California's tidal wave of marriage ceremonies, Woodhouse-Keese is planning to carve out the "hour of time it would take to update the website," swapping out older terminology such as "commitment" with "marriage." 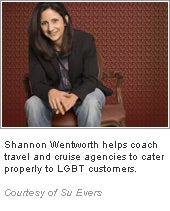 Shannon Wentworth, founding partner and CEO of Sweet, a business that launched in April and merges lesbian travel with social and environmental awareness, says point of view is key in her marketing strategy.

"The whole value of having a lesbian vacation is the lesbian point of view gets to be honored all the time--that doesn't happen in mainstream resorts," she says. "Our perspective is, really know your consumer and how your company can help them."

In partnering with LGBT and green-friendly travel and cruise agencies, Sweet steps in, coaching them on how to adopt a new point of view.

"When we go on a cruise ship, we educate the staff," Wentworth says. "It takes a few days for the captain to stop saying, 'ladies and gentlemen.' "

Sweet has several honeymoons booked and expects them, along with other life celebrations, to be a significant part of its business.

The Right Words for a Long-Term Relationship

"The word 'fabulous,' that's very much a gay male thing. Someone targeting lesbians and saying 'fabulous'--well, they're really after gay men and don't understand. I see that all the time. They're really going after the urban gay male," Rudolph says.

Some businesses are waiting to see the outcome of California's November election--and the proposed ban on same-sex marriage--before they begin marketing to the LGBT community.

The state's top court decided July 16 not to remove an initiative--Proposition 8--from the November ballot. If it passes, Prop. 8 would limit marriage in California to one man with one woman.

Nina Smith, founder and editor of Queercents.com, a website that helps young gays and lesbians learn fiscal responsibility, and Rudolph maintain that it's important for businesses to cater to same-sex celebrations, whether it remains legal to marry or not. Smith says it helps the LGBT community when businesses recognize them. She applauds companies that reject boycott threats and continue to support the LGBT community.

"The more mainstream our lifestyle becomes, the better it is for all of us," Smith says.

And marriage is only one category of needs.

"My 'marriage' is more in line with the goods of the financial services industry than with wedding planners," Smith says, listing areas such as assets, liabilities, estate planning, second parent adoption, power of attorney and living wills. "Advertisers take note."

"I think we're going to buy stuff whether we're married or not," Rudolph says. "Companies that market now will have a little bit of an edge. And coming after us in a respectful way can generate loyalty."