The arrival of the Olympics showcases China's burgeoning entrepreneurial spirit.

By Joanne Yao August 7, 2008
Opinions expressed by Entrepreneur contributors are their own.

More than 4 billion people are expected to watch the 2008 Summer Olympic Games, where 10,500 athletes are competing in 28 sports. More than $40 billion have been spent on the construction of Olympic venues and infrastructure to prove that China's capital city indeed "welcomes you."

But China has loftier plans, plans that go beyond serving as a backdrop for the biggest sporting event in the world. The immense planning of Beijing 2008 is China's way of showing the world that it's ready to be treated as a leading nation after almost 100 years of struggling to get there. 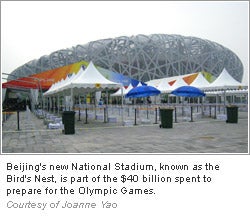 An estimated 4.5 million visitors are expected to gather in Beijing between Aug. 8 and 24, leaving behind a $4.5 billion chunk of overseas tourist spending.

"The Olympics is the debutante ball for China. It's amazing how they took this sporting event and turned it into a stage," says Corbett Wall, 43, co-founder and China director of Jade Dragon Development, a company that partners with foreign investors and developers to identify and acquire retail sites in second- tier cities.

Many people speculate that China is communist in name but capitalist in practice--perhaps it's more accurate to say that the country goes by a "whatever works" system. Deng Xiao Ping, the first Chinese leader to advocate privatization, famously said, "I don't care if it's a white cat or a black cat. It's a good cat so long as it catches mice."

The private sector has undergone a speedy evolution since President Jiang Zemin's 1997 call to increase "non-public ownership," while shutting down and selling the majority of China's state-owned enterprises. Private enterprises have proven to be most successful and now account for 70 percent of China's GDP--70 percent of profit in the second-largest economy in the world.

Since Beijing's confirmation as host city in 2001, China has seen record highs in venture capital investment. According to the China Venture Capital Report by Zero2IP, VC funds totaled $2.36 billion in the second quarter of 2007. Foreign funds accounted for nearly 90 percent of funds raised in China that same year.

Twenty or thirty years ago, small businesses were seen as either desperate ways to make money or for the greedy to hoard money at the expense of everyone else. Now 50 percent of college graduates in China say they are seriously contemplating starting their own business, and small business is seen as a way of equalizing China's intense wealth disparity--less than 1 percent of urban Chinese holds 70 percent of the country's wealth.

Capitalizing on Growth
Whereas larger cities such as Beijing or Shanghai are relatively saturated with retail shopping malls, second-tier cities like Tianjin or Xi'an are experiencing high growth as wealth pours into the middle class. Wall's company, Jade Dragon Development (JDD), identifies the top 1 percent potential of given markets. 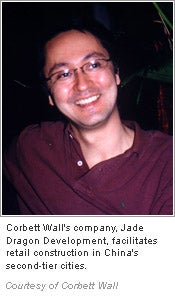 JDD is currently working on six property deals, sized between $20 million and $330 million. Nike and Wal-Mart are among its clients. Although this type of service is commonly used in North America and Europe, JDD is the only company to offer it in Asia. Since Beijing's Olympic nomination, the company has seen more inquiries from foreign clients.

Wall, a musician who is half-Japanese, half-American, has spent more than 20 years doing business in Asia.

"I've been fighting, loving, breathing the Chinese. I couldn't see myself anywhere else in the world," says Wall, once Taiwan's first non-Chinese pop star.

His advice for entrepreneurs looking to China: "You have to be unbelievably nimble, completely open-minded."

Filling a Fitness Void
It also helps to be perceptive.

The Chinese government has been keen to promote sports and fitness ever since the successful Olympic bid and as a solution to China's rising obesity problem. From 1991 to 2004, the percentage of overweight and obese adults increased from 13 percent to 27 percent. 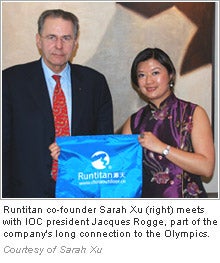 Sarah Xu is a co-founder and CEO of Runtitan Outdoor Manufacturing Co., the first company to bring outdoor sporting equipment to mainland China. The Kunming native recalls her family's frequent mountain hiking trips in her hometown. The idea of manufacturing and retailing affordable sporting gear to the China market occurred to Xu when she was studying for her MBA in New York.

At a time when China's brightest were considering tech startups, Xu created Runtitan with just $100 from her savings. In 1999, she moved operations to Shanghai.

So Xu built a campground site to show them. She even had to submit a protocol explaining her business to the Chinese Chamber of Commerce. Consumers got a glimpse of the outdoor lifestyle and wanted more. Runtitan enjoyed exponential growth--the company reached $10 million in 2007, and Xu projects $13 million to $16 million this year. China's sports industry is rapidly developing, with the Hong Kong Trade Development Council speculating that the sports market has a potential of $250 billion.

Although Runtitan faces competition from global sports brands such as Columbia Sports and Timberland, it also holds a unique trump card: Xu's ability to insert her company into the Olympic "brand name."

In 2004, Runtitan sponsored a Chinese documentary on Juan Antonio Samaranch, the former International Olympic Committee (IOC) president, and also participated in the IOC's "From Great Wall to Olympia" event. Runtitan's products were the only outdoor equipment used in the closing ceremonies of Athens 2004. In May 2008, Xu met current IOC president Jacques Rogge at Lausanne, Switzerland, to present him with a set of golden Runtitan hiking boots as part of a healthy lifestyle promotion.

Inspired by Nature
Xu's mission is to bring zest for outdoor sports and an outdoor lifestyle to the Chinese, many of whom live in cities their entire lives. Gabriela Lo, 33 and Grant Horsfield, 32, would agree with that goal.

The two quit their day jobs in Shanghai to develop Naked Retreats, an environmentally friendly resort in the Mogan mountains of China that urges its (fully clothed) visitors to clear their minds to escape the stresses of city life. On a morning bike ride, Horsfield noticed dilapidated colonial villas dotting the mountaintop. It turned out the Mogan mountain, with its balmy weather and spectacular vistas, was a popular getaway for foreigners in the 1880s who were also looking for a temporary escape from the demands of Shanghai city life.

Within a month, Lo and Horsfield rented the weather-worn homes from a village on the mountaintop (the name has been forgotten even by the villagers). Drawing from personal savings, Horsfield spent $365,000 to renovate three villas, opening them to the public in February 2008. 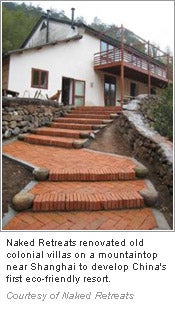 Naked Retreats currently employs half of the village's 20 residents as nannies, construction workers, wood carvers and handymen, as well as an additional 10 city friends in its Shanghai booking office. Since many of the villagers are over 50, it's nearly impossible for them to find good work in the surrounding cities. Through word-of-mouth, the number of guests has increased from 33 in February to 175 guests in May, with many more on the waiting list to visit China's first eco-resort.

The second phase of renovation, slated to finish by the end of August, will yield six more livable villas complete with wooden ceilings, beds and furniture carved from Mogan mountain logs. Lo and Horsfield estimate Naked Retreats will bring in $292,000 in 2008--making back the majority of renovations and rental costs within its first year of running.

A timely entry, an extensive network and new-to-China products will be essential to success in this increasingly complex market. With the heaping exposure from Beijing 2008, it's likely that China will become an increasingly common destination for international business.

But for entrepreneurs, China may be a golden ticket for two reasons--comparatively low startup costs coupled with consumers excited to purchase products to match their evolving philosophy and lifestyle. Beijing 2008 is modern China's most focused attempt to showcase its changing form, and small business owners interested in the world's most populous nation would do well to pay attention.