Before There Was Web 2.0

These two entrepreneurs developed a way to connect employees and customers through community software.

By Amanda C. Kooser August 21, 2008
Opinions expressed by Entrepreneur contributors are their own. 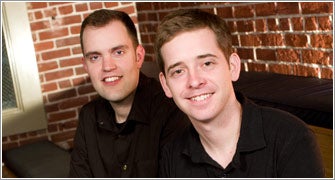 Up for debate:Jive Software co-founders Matt Tucker and Bill Lynch go way back. A trophy from their days as high school debate partners still graces their Portland office. Jive's origins can be traced to the University of Iowa, when Tucker and Lynch first pooled $70 to buy business cards. "We had a dorm room that looked like an office," says Tucker. "I can proudly say that after that initial investment, we've been profitable ever since."

Jive talking: Jive was ahead of its time when it launched in 2001. Now it's ahead of the pack. "When we starting doing collaboration and community software seven years ago, it wasn't the cool thing to do," says Tucker. "That was before Web 2.0. The market evolved at the same time we were evolving our products." The latest version of Jive's flagship enterprise social software platform, Clearspace, has kept the company positioned in front of its competition.

Portlandcalling: After stints in Iowa and New York, the founders relocated to Oregon in 2004. It was a smart move: In 2007, they received their first round of venture capital from Sequoia Capital and nearly tripled their staff over the course of the year. Says Tucker, "We loved being a bootstrapped company, but we always knew at some point it would be time to hit the gas."

Best of both worlds: Tucker takes pride in Jive's company culture. With a keg in the break room, infamous happy hours on tap and an open office environment, they combine the work ethic of a Silicon Valley startup with the good-natured approach of the Portland lifestyle.

Follow their lead: Make maintaining your unique business culture a priority, even in times of rapid growth.

What is your secret to success?
Tucker: The Jive company culture has been the fuel behind everything that has happened to the company. It's let us attract very talented people. When you have people that really love working together, you like to have fun together.

What advice would you give other entrepreneurs?
Tucker: Bootstrapping ended up a being a great model as a way to form the foundation of the company. There are all sorts of cases where bootstrapping doesn't make sense. When we started the company, it was not a well-defined market, and we were inexperienced, coming right out of college. When it does make sense, we think the bootstrap model can be an amazing way to grow a company. Bootstrapping forced us to be lean and profitable. It also gave us time learn how to run a company and to build the deep technology stack that we're leveraging today. In other words, when we started pressing the company growth gas pedal in 2007, the engine didn't instantly burn out.

When did you know you had "made it"?
Tucker: The thing about it is, you keeping running into glass ceilings as you're climbing the ladder, and you break through each one. The problem is that the ladder keeps going and you're always setting higher and higher goals. When we got through the first couple of years, we knew that we were operationally sound as a business. We had hundreds of customers, were profitable, and our products were advancing quickly. We like to look back and celebrate, but we're always continuing to climb at the same time.

What was the first toy or reward you bought for yourself when you became successful?
Tucker: I did buy a nice bottle of champagne when we closed the funding round with Sequoia. I'm not a huge toy person.