Bored while her baby slept, this mother created organic, cloth diapers.
Next Article

This story appears in the December 2008 issue of Entrepreneur. Subscribe » 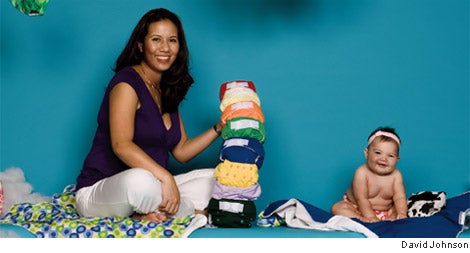 Margarita McClure found that when her first baby was born, she had a lot of extra time on her hands. "For those first few months, the baby doesn't do much," she recalls.

So she filled the hours with a project that eventually became a business earning 2008 sales of more than $1.4 million. In 2005, while her baby slept, she created Swaddlebees.

McClure, 34, began designing and manufacturing organic cloth diapers because she couldn't fathom all the waste created by disposable diapers. "We don't generate much waste from my house, and the thought that I'd need an extra bag or two or three for diapers seemed wasteful," she explains. Plus, "They're hypo-allergenic, and a lot of parents feel better knowing they're putting natural fibers next to their babies' most sensitive areas."

The mompreneur made her first sales on eBay. "I made a dozen orders, put them on the site and sold the first one for $26. At that point, it was an unknown brand. It got me thinking that this had potential," she remembers. Soon after, she found a fabric supplier and developed a website.

Today, Swaddlebees, along with McClure's second diaper company, Blueberry Diapers, sell at nearly 100 boutiques and online stores, many of which are run by other mothers. "Last year, we had almost 200 retailers, but I found that many of them weren't serious about their businesses," she says. "So we set standards that our retailers need to hit certain volumes to work with us." By cutting the number of stores she works with, she has doubled her own volume because she's been able to concentrate on her better-performing customers.

McClure, a former restaurateur, attributes much of her early success to luck. "When I first started out, I didn't advertise. Our customers are always on the lookout for new brands, and somehow they found me."

And while she never had plans to start her own diaper company, now she can't imagine doing anything else. "I'm proud of myself," she says. "We're all having fun here."

JJ Ramberg is the host of MSNBC's small-business program Your Business and co-founder of GoodSearch.com.
loading...
More from Entrepreneur