In tough times, company perks tend to take the hit first. But how do you axe them while keeping employees happy?
Next Article Add to Queue
Chris Penttila
Magazine Contributor
December 18, 2008 8 min read 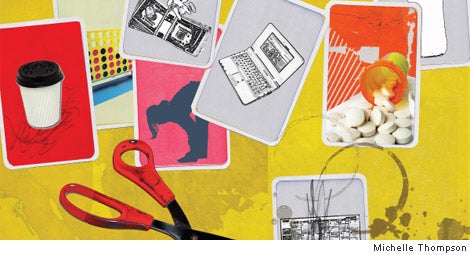 Like most companies, RedPeg Marketing offers perks to its employees. The Alexandria, Virginia, experiential marketing firm hands out trophies for good performance and provides breakfast at staff meetings. Employees can compete in an annual Connect Four tournament as well as participate in lunchtime training sessions. Open the company fridge, and you'll find cold beer.

RedPeg co-founder Brad Nierenberg, however, has been known to go above and beyond with company perks. He shells out $17,000 a year to rent a three-bedroom house in Dewey Beach, Delaware, that the company's 48 employees can sign up for year round. "That's one of the perks I've kept even in the downturn," says Nierenberg, 42.

He once walked into the office carrying a briefcase containing $38,000 in cold, hard cash and presented each employee--38 of them at the time--with $1,000 for meeting company goals. "I thought, 'I've got to make a big deal out of this; I can't just put it in their checking account because that's not as fun,'" says Nierenberg, who saw sales of $18.5 million last year. "I thought it would be cool for them to see $38,000 in cash."

But Nierenberg has also taken perks away. He ditched employee use of a Mercedes for a whole month, free gas included, because he felt it was an expense that wasn't necessary. He also stopped a company program that allowed employees to take off a certain number of Fridays during the summer because business was picking up and the company needed to make up ground after a few slow quarters. "You definitely can take a perk away," Nierenberg says, "and you should if it's affecting your business."

But wait a minute: Conventional wisdom says it's a bad idea to pull a perk once it's out there. Yank away something employees have come to expect, and you're setting yourself up for rampant conspiracy theories and angry employees. Google learned that the hard way last spring when it announced it would charge employees 75 percent more for its in-house day-care program. Employees with children didn't take the news well, and some reportedly started to cry. Google has since reduced the price and will take more than a year to phase in the cost adjustment, but at what cost to morale? "Anytime somebody is receiving something and then, all of the sudden, they're not, clearly they're going to be upset," says Deb Cohen, chief knowledge officer at the Society for Human Resource Management, an HR membership organization.

Of course, there's a difference between the perks employees structure their lives around, like insurance, day care and flextime, and the frivolous perks, like bagels on Monday. And it's these types of perks Google has also trimmed down to cut costs without affecting employees significantly: In October, the New York City division instituted limits on cafeteria hours and food selections. "No one is going to quit because they can't get free coffee or pastries," says Bob Nelson, an employee motivation and management consultant and author of 1001 Ways to Reward Employees. But the risk you run, he says, "is a panic that if the company can no longer afford coffee, it must be headed for disaster."

It's this perception that entrepreneurs want to avoid. Last Year, Expedite Group, a 7-year-old Cary, North Carolina, concierge company, debated whether to decrease the 401(k) matching contribution it offers its 17 employees. "We've struggled with matching it at times," admits founder Nancy Piepho, 39.

She decided to leave the match alone, however, because lowering it might create doubt in employees' minds. "We want the employees to have confidence in what we're doing," Piepho says. "That was one of the reasons I was like, 'It's not going to be easy, but it's not a lot [of money] and it's the right thing to do.'"

A tough year
Next Level Café, a St. Paul, Minnesota, technology management firm, saw 2007 as a great year. But 2008, not so much. "It's been a tough year," says CEO and co-founder Rich Anderson, 38. "We haven't been growing as much." Morale was falling, so last autumn, Anderson began tracking morale through a weekly survey that he plotted on a graph. He met with the company's 25 employees and told them the truth: The company wasn't at risk of failing by any means, but it wasn't a great year and that meant fewer bonuses and perks.

Anderson, who co-founded the 7-year-old company with Stephen Weiler, 43, also started sharing some information about the company's budget. He revealed that 75 percent of the service company's expenses are salary-related, and he explained how a drop in clientele affects the expense side. An enlightening moment came when Anderson asked employees to guess how many clients the company had won and lost to date in 2008. "Every single person on the team underestimated," he says. Now the company posts the names and revenue of new and former customers on a wall--a daily reminder of where the company stands. Morale is on an upswing, and the company closed 2008 with $2 million in sales.

Entrepreneurs shouldn't fear pulling a perk, but they should fear doing it without employee involvement, Anderson warns. "As soon as you do it without having employees involved in the process, they're going to resent it and fight back. They're going to use it as a reason to leave if they're looking to leave," he adds. "If you get them involved, they'll support the decision. They'll embrace the world that they helped create."

Central to a good communication plan is anticipating how employees will react when a perk is taken away and who will be most affected. You'll also have to decide what kinds of low-cost perks could replace what's gone. "Think about how you can offer the same or similar kinds of benefits in a different fashion that won't cost you so much money," says Cohen.

PerkSpot, a perks management company that creates customized portals where employees can go for discounts on a wide range of consumer goods, is seeing large companies implement its service to offset other benefit cuts they're making, including insurance coverage. In one case, a national retailer rolled out PerkSpot when it announced it wasn't giving anyone a raise. Says founder and CEO Christopher Hill, "They wanted to introduce PerkSpot to help soften the blow."

Linking perks to performance
Cohen sees companies moving toward flexibility and other unique benefits that promote work-life balance. "That's really been dictated by the work force," she says.

Nelson, however, thinks now is the time for companies to link perks to performance. This way, companies don't create cultures of entitlement where employees feel the company owes them just for showing up. "Smart companies are offering perks to the performers who have earned those perks," he says.

Expedite Group has its share of softer perks, from Wii nights to beach trips to potlucks. Piepho, however, is most concerned with keeping her best performers happy, so she tailors perks to them. She's letting one employee with an infant work flexible hours from home, while a rising star in the company is getting greater responsibilities. "What do pivotal employees need to thrive? That's what you should focus on," she says. "I know who my stars are, and I'm going to focus on them."

There are still high expectations, however, particularly from the company's Gen Y employees experiencing a recession for the first time. "It's not their fault; they haven't had the different experiences that us hugely older people have had," Piepho says, laughing. "Recently, [we said], 'This is what the pay range is, and if you're not happy with it, go forth and be happy.'" Employers in a lackluster economy could find that sharing their blues is better than sinking into the red.

Chris Penttila is a freelance journalist in the Chapel Hill, North Carolina, area.

The Four Bs of Planning a Successful Conference for 2021