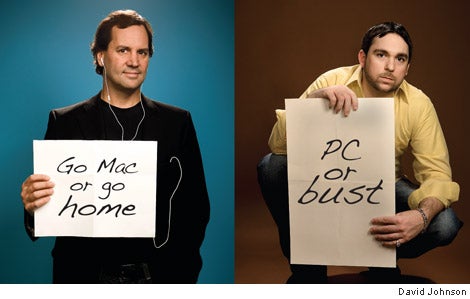 Steve Luttmann
Leblon Cachaça
I've had my Mac since:
2003, when a friend first introduced him; "I bought one immediately," says Luttmann, 43, founder and CEO of Brazilian spirit company Leblon Cachaça.

Tool of choice:
At the moment, Luttmann, who founded his company in 2005, uses the Power Mac G4 and MacBook Air. Oh, and then there's his MacBook Pro, iMac at home and new iPhone. He admits, "I have an addiction to practically anything Steve Jobs puts out." Luttmann syncs all his calendars, e-mail, files and more using .mac and .me.

Mac on the job:
Addiction, maybe, but Macs have been essential to the 30-person company--only four employees aren't Mac users; Luttmann's CFO is reluctant to switch. Because the company is based in New York City and Sao Paulo, Brazil, with reps spanning the globe, staff stay in touch via iChat. On the creative side, Leblon's designing, advertising and marketing are done internally using Adobe InDesign, Illustrator and Photoshop. The team also uses iMovie, Final Cut and ProTools. "I'm a true believer that [the Mac] is what allows us our creative delivery," says Luttmann, pointing to extensive visuals, layouts and video on liveloveleblon.com as an example. "That speaks to the power of Macs."

Why I love my Mac:
"On the functional side, I can do very cool things quickly and efficiently," says Luttmann, who saw 2008 sales of $5 million. "On the emotional side, I feel cooler, cutting-edge. [Apple Inc.] makes you feel special, like part of this creative, extroverted, 'zigs while everyone zags' crowd."

Justin Hamel
MastaMinds Inc.
I've had my PC since:
1986; "I'm an '80s baby and was born on a PC," says Hamel, 28, founder and CEO of specialty e-tailer MastaMinds Inc. (mastaminds.com). "I started playing around with a Commodore 64 and have been hooked ever since."

Tool of choice:
Though Hamel, who founded the company in 2001, has been through 11 PCs in the past two years, he's currently using a Hewlett-Packard laptop and a customized, high-powered desktop with five 27-inch monitors.

PC on the job:
Hamel's extensive desktop setup lets him easily manage his 50-plus specialty web stores that sell rare and high-end products, such as after-market performance car parts and home theater seats. He and his 32 employees--who all use PCs--work on various projects using WordPress, build stores with open source software via OSCommerce and upload content to their platforms online with FlashFXP. Hamel, who saw 2008 sales of $12 million for the Howell, Michigan-based business, says he's on his PC "up to 16 hours a day using up to 16 different software programs: I use it for checking on virtual employees, e-mailing, research, social networking and uploading marketing materials and products to the database."

Why I love my PC:
Even though Hamel admits Macs are "sweet," he'd never make the switch. "A PC is very flexible and easy to customize for my business and personal needs," he says. "Windows XP and Firefox do everything and more for my business. The only Mac [for me] is in my diet: a Big Mac."

Are you a PC user who wants to make the switch? Check out Jason Rich's new book, Mac Migration: The Small Business Guide to Switching to the Mac, now available at entrepreneurpress.com and all major booksellers.