The generation is affected by current conditions, but members will stay true to their characteristics.
Next Article Add to Queue
Lindsay Holloway and Kim Orr
Magazine Contributor
January 16, 2009 3 min read

This story appears in the February 2009 issue of Entrepreneur. Subscribe » 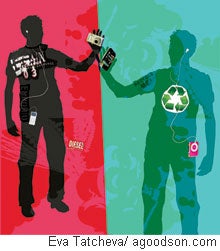 Seventy-five million strong, millennials have been through a lot in their nine to 27 years of life--all of it shaping their hip, innovative demographic. But recent environmental, economic and political happenings have triggered a shift in the buying habits of this group--an "unblinging."

While they are definitely changing, Ann Fishman, president of Generational-Targeted Marketing LLC, says millennials will always stay true to their generational characteristics. But recently, their characteristics have surfaced and evolved. "Know these characteristics," says Fishman, "so as they move to the next stage, you'll be there waiting for them."

New: With economic and environmental factors in play, millennials are now putting more thought into their fashion choices. "It doesn't mean they don't care about fashion," says Fishman. "They still do, but maybe years ago it was cool to wear Britney [Spears'] blue jeans, and now it's cool to be civic."

Tech Gadgets
Old: Technology is the exception to the rule when it comes to millennial buying habits; millennials will actually scrimp in other places just to afford the latest gadgets. Says Fishman, "If there's a way that lets them communicate and stay connected better, they'll be there."

New: Once devoted to MP3 players and digital cameras, millennials have now kicked it up a notch with the all-inclusive iPhone. An October 2008 Piper Jaffray survey of 850 students found that 8 percent own an iPhone and 22 percent expect to buy one in the next six months.

Sustenance
Old: Busy schedules and disposable income meant lots of eating out for millennials. In 2005, FastFoodSource.com reported that twentysomethings were frequenting restaurants (whether sit-down, carry-out or drive-thru) more than any other age group in history.

New: Many grocery store chains have seen increased business, suggesting that more people are eating at home and packing lunches--with Whole Foods leading the natural and organic pack. Morning lattes have been cut back, too, as evidenced by the 600 Starbucks scheduled to close by the first half of this year.

Shopping
Old: "Millennials began shopping earlier than any other generation and have a lot of disposable cash," says Fishman. For a while, this disposable cash meant that millennials were spending big--so big that high-end and specialty stores saw much more business than one-stop shops.

New: Even in the economic decline, spending from this generation continues to rise, albeit much slower than before the $700 billion bailout. "They're savvy shoppers," explains Fishman. "When they can no longer shop at Prada, they'll start being the kind of shoppers that they need to be for the situation they've been thrown into."

Transportation
Old: You'd think the trend toward environmental awareness would put millennials in the top tier of hybrid car buyers. But a 2007 review of auto industry marketing by J.D. Power & Associates showed that 62 percent of hybrid owners are actually over age 45.

New: So how are millennials getting around? Bikes and public transportation could be one way; the Bikes Belong Coalition reports a significant rise in bike sales across the country. Or perhaps millennials are just getting around less. It's surprising what you can do with mobile communication, the internet and a thrifty mind-set.