How to Address Consumer Fear...

As it becomes the new reality

You might be wondering whether your marketing efforts should adapt to the economic downturn. Should they address or ignore consumer fear? Worries and superstitions (which have been proved to decrease sales) get an extra push this month with Friday the 13th and the Ides of March, so we've asked George Belch, professor of marketing at San Diego State University, to tell you the best approach. 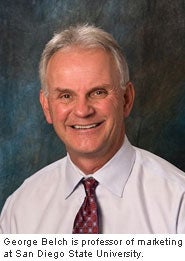 When credit was readily available, consumers didn't worry too much about credit. Now credit all of a sudden isn't readily available, so it's gone from "Geez, what's my interest rate going to be? But I'll get credit," to "Can I even get it, even though the interest rates aren't high?" The other thing that's particularly prominent here is the media coverage as a driver. It's hard for consumers to escape all the negative information; a lot of the negative information pretty much rotates around these factors. We moved into this new world of talking about fear rather than confidence and things that we took for granted--never really thought about the fact that our home values were going up or our investment portfolios were OK. We weren't concerned about our jobs; there wasn't that much negative information. I mean, now all of a sudden those things are coming out . . . all the discussion and focus on them is negative.

How has the recession affected those drivers?
What you have to do is consider the normal drivers. We used to talk about confidence; now we've shifted to fear. And those factors that I talked about--housing, unemployment, investment portfolios--those are the things that are making those factors very, very salient and very prominent.

Is this whole milieu of fear something we've never seen before?
Not to this degree, no. We have to remember--we've seen blips, but for decades we've gone through periods of prosperity. We've had a few recessions in the '80s and early '90s, and then after the dotcom crash and a little after 9/11, but I really don't think we've seen anything like this. This is just uncharted water for most consumers; it's never been about "Gee, is this depression vs. recession?" I just don't think we've been there before.

Does this kind of consumer fear stay with the consumer for life?
If you go back and look at the older generation who went through the Depression and World War II, they were clearly much more fiscally conservative, really leery about the use of credit--credit for them was home and car, maybe a credit card if they were willing to pay it off. Those were values that lasted throughout their lifetime. It's kind of an interesting thing that we're seeing right now, because this is very, very new and I think we don't exactly know. This really, really deep recession that we're in is still very young; the real downturn started in the fall and we're only six to seven months into it, so we don't know yet. While we're obviously already seeing signs that consumers are changing spending patterns, whether it will stay that way is the $64,000 question. I don't think that all of a sudden we're going to wake up one day and consumers are going to say "OK, everything's OK again, let's go spend." I think you will see some shifts in behavior.

What's your take on how the media influence consumers? It seems like every time I see a piece of media, especially TV, there are programs on how to save that send a message that you need to save--that you have no money. But that's not necessarily true for everybody; it's only true for the people who've lost a lot of savings or lost their jobs. So do you think that's making people who really have no fear of losing their job or savings want to hunker down and not spend?
Yeah, I definitely do, and I'm glad you used that term "hunker down," because that's appropriate. That's just what we're seeing. The one thing that I would note, though, is you kind of said people have no fear, but everybody is starting to get somewhat concerned. You're coupling that with people really concerned about "hey, I could lose my job, and secondly my retirement and other savings have been decimated," so all of a sudden, that's wow: "It's one thing if I lose my job and I've got an investment portfolio to fall back on, but now that's gone." That's the double whammy. People are looking and saying "people I know have lost their jobs, they don't know what they're going to do, their savings have deflated drastically." They're saying "what if that is me?" The old "that can't happen to me" is now "I don't think it is going to happen to me, but it definitely could."

What's the best way to address consumer fear?
I think you have to be careful. You can't hit it directly; you can't go out and say "Hey, things are really bad so let me show you what you should do here." I think marketers try to be a little softer in the sense that they try to approach it with positive language--talking about things like savings and value. While marketers know what the motives are, I don't think they want to come out and directly raise the red flag, if you will. There are some who might do that, but I think overall, no matter who you are, you want to tell a consumer you have a great deal and a great value; at the same time, you don't have [marketers that say], "The economy is going to hell in a handbasket--I've found a way to save you money." If you're too negative or raise that fear, you run the risk of making the consumer think "Should I really be spending at all?" I think what we're seeing is consumers are saying "geez, I have to shift from needs to wants. I mean, I may want it but do I really need it?" If in any way the marketer's offer gets me to think for a second if this is a need or a want, then you [the marketer] might be short-circuiting the whole process.

Is it better for businesses to avoid mentioning consumer fear altogether or to somehow address it?
It's something that they need to address but in a softer way. Marketers have a way of sitting back with their ad people and finding the words that still address and get across what they're trying to do. For example, the operative term is value; everybody's talking about value and they're trying to suggest value. I think part of what they're trying to do is suggest that things aren't as expensive as people think they are.

Which businesses are doing that successfully?
Like Starbucks--they've been running some ads saying "Hey, we're really not any more expensive than McDonalds." They're not going to say "Hey, we know you're concerned about money." More or less they're saying "we've got to address what our competitors are doing and really point out to the consumer that we're offering pretty good value for them." I think that's one of the key things that marketers are really focusing on right now; they're going to talk about things like savings, value, deals.

When should a business note the economy in its marketing efforts?
There are going to be some marketers who, if they really have a major price difference or major advantage to offer, then it's probably going to behoove them to play that up. There's no doubt about that.

What are some examples of marketing ploys you've seen that are working? Why are they working?
I guess I'd come back to value. If you look at some of the companies that are seeming to hold up to this--McDonalds, Wal-Mart, some of those types of companies, some online retailers, people like Amazon have done pretty well. Part of what those companies are offering is value. They're offering very competitive prices; they're able to appeal to what has clearly become a price-sensitive consumer. Interestingly enough, I saw yesterday that movies are doing pretty well. Well, that's something consumers indicated was a discretionary item they weren't going to come back for, but people are going to the movies. Alcoholic beverages, well, they're not growing--they're not losing, either. There's the old "people drink during good times but they probably won't stop during bad times, either"--there the shift has been home consumption vs. going out. Another example is some restaurants are starting to move to fixed-price menus--a three-course meal for $40. That way consumers can stick to their budget and know they aren't going to break it by going out to dinner. That seems to be resonating with people.

I'll tell you what--there are not many companies that are finding the answer to it right now. At the end of the day, we're seeing consumer spending declining, and a lot of the spending we're seeing is going more toward necessities. Marketers who are in those categories of products and services where consumers question whether they really need them--I think they're being challenged. They've got to be really tight with what I call market segmentation. Entrepreneurs have got to consider time segmentation and place because the price elasticity of people varies by time of day or day of week. A lot of golf courses know they can still get reasonable rates on the weekends, but during the weekdays they've really got to drop those rates or in the afternoons offer some twilight specials. You've got to look really hard and say "I can't approach it as a mass market anymore. People are going to vary in their price sensitivity and I've got to appeal to that." Which means more multifaceted pricing programs. The flip side is you can't drop price across the board because, once you do, how do you ever get it back up? Once you lower price it's not easy to get it back up and, particularly, we don't know if the economy's going to turn around any time soon, so you have to be careful about that as well.

Is there any kind of trick business owners can use to keep their prices the same but at the same time not run the risk of losing potential customers for whom that price package may not fit?
What it comes down to is that in these kinds of situations you have to be flexible with your pricing policies--look at the possibility of bundling various services. I'll go back to what Starbucks is trying to do; they're trying to offer good value by bundling coffee with a muffin or something. Can I have multifaceted pricing programs, can I bundle things together, can I cater in one way or another to consumers who want full service vs. consumers who're willing to settle for partial services? Those are some of the things that I think they can do. They're going to have to be very, very flexible in their programs.

George Belch is a professor of marketing and chairman of the marketing department at San Diego State University. He is also co-author of Advertising and Promotion: An Integrated Marketing Communications Perspective .