His customers build their own burgers as he builds his burger biz.
Next Article Add to Queue
March 17, 2009 2 min read 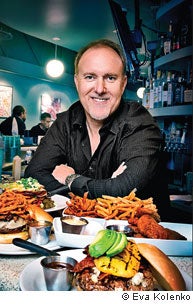 Franchisee: Peter Katz, 52
Franchise: The Counter, a build-your-own burger chain with 18 locations in the U.S., Australia and Ireland
Number of franchises: Four in Northern California owned by Katz and partners

Before franchising, Peter Katz: Worked in the software industry for 20 years and ran sales and marketing for a number of companies and startups

Why he chose The Counter: Most other franchises seemed formulaic and prefabricated and didn't offer anything unique to customers. "[But] I saw a lot of myself in The Counter," says Katz, who became the restaurant's first franchisee. "I believed in the concept. I believed it was different."

Startup costs: $700,000 to $1 million per unit for new store openings, plus the cost of Northern California territory rights

Biggest startup mistake: "We let other supposedly more experienced people tell us what to do," Katz says, "even when it was against our instincts."

Gives back by: Mentoring new franchisees

Sales: More than $10 million projected for this year

What helps him unwind: Enjoying a glass of añejo tequila and a cigar with his wife, Jennifer