This Winery's Vintages Speak for Themselves

Cloaked in quiet--off the beaten track and south of Yountville--stands Bell Wine Cellars . The serene stone winery is surrounded by Hopper Slough and by rows of vines in all other directions. This is a winery where wine tourers are asked to call first for an appointment, and arriving guests can understand why. There's a feeling of composure throughout the grounds; a quiet that allows the wines to speak for themselves.

Born on a wine farm in South Africa, winemaker Anthony Bell gained practical and academic experience in Spain, France, South Africa and California before he formed Bell Wine Cellars with a winegrower nearly two decades ago. Perhaps the most significant entry on Bell's lengthy resume is his 15-year stint with Beaulieu Vineyard, where he worked alongside master winemaker André Tchelistcheff. His achievements at Beaulieu were many. Most notably, he wrote the definition of the Carneros appellation, raised the bar on grape quality for the vineyard, and conducted groundbreaking research into the differences and impact of clonal variations on cabernet sauvignon.

Today, Bell's name is often associated with Clone 6, a clone that Bell fostered back to productivity after 100 years of neglect in a former University of California vineyard in Amador County. Bell found Clone 6 so promising that he produced Napa Valley's first single vineyard Clone 6 Cabernet Sauvignon in 1991. Bell Wine Cellars' Clone 6 Cabernet Sauvignon, grown on the Beckstoffer Georges III Vineyard off the Silverado Trail in Rutherford, is consistently a star. The 2005 vintage was recently awarded a 93 by Bell Dias Blue of The Tasting Panel for its dense, complex and well-balanced flavors. Quite drinkable now, the wine should age well over the next five to 10 years. 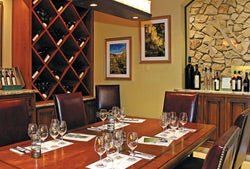 In addition to Clone 6, Bell makes four other cabernet-based wines at varying price points. They are: Talianna, a proprietary blend of Clone 6 and Syrah; Sonnette, a vintage-driven Bordeaux blend of cabernet sauvignon, cabernet franc, merlot, Malbec, and Petit Verdot; Napa Valley Cabernet, an Old World-style blend of four clones featuring an attractive, midrange price; and the Claret, a New World-style cabernet blend. In addition to Petit Verdot, Syrah, sauvignon blanc and a delightful dry rosé, Bell produces merlot and chardonnay off the winery estate, as well as individual bottlings of the four cabernet clones he works with.

Although all of Bell's wines receive high praise, he is most often associated with the development of Rutherford Cabernet. "Rutherford Cabernet is not linear, but layered, and very seductive," Bell says. "The wines don't express themselves at first taste; the tannins carry the wines. They are firm, but they don't bite."

Long before it became fashionable to talk about terroir, Bell was exploring its nuances. At the 2005 Grand Harvest Awards sponsored by Vineyards & Winery Management magazine, the Bell 2002 Cabernet Sauvignon, Napa Valley, was selected as most representative of the Napa Valley terroir. Yet Bell is not one to rest on his laurels. He makes it a point to be on hand to greet tasting room guests, and sometimes pours and talks about wine.

Getting there:
From Hwy 29 in Yountville, head east on California Drive. Turn right onto Washington Street. The winery is on the left.

Onto Innovation (ONTO) Surges 11.4%: Is This an Indication of Further Gains?