The Life of the Party

These brothers turned gaming into a mobile franchise empire. 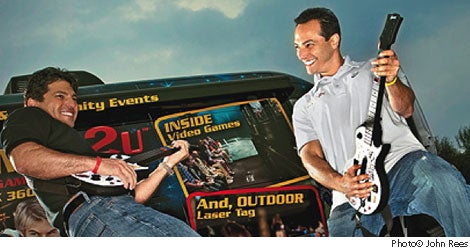 These days, giant hamster balls and air cannons are all in a day's work for Stuart and David Pikoff. But when they first decided to go into business together and looked into buying a kid-related franchise, the Pikoffs couldn't find anything they felt was both unique and affordable. They eventually decided to start a franchise of their own and, after months of development and research, launched Games2U in 2007. Now the Pikoffs are responsible for--quite literally--bringing the party to kids across the country, with vehicles transformed into mobile theaters equipped with the most popular video games.

The franchise fully incorporates the Pikoffs' fun-and-games business philosophy. While their core business comes from kids' birthday parties, Games2U books everything from corporate events to church festivals, and its franchise models consists of three different vehicles for various events. In addition to popular games like Guitar Hero and Halo 3--amped up with flat-screen TVs, state-of-the-art sound, fog machines and laser-light effects--Games2U also offers activities like outdoor laser tag and human gyroscopes. It even came up with a new twist on the piï¿½ata called the Game-yata. "We want the average kid to have a birthday party like a rock star for a very reasonable price," says David, 42.

Since it started franchising last year, Games2U has sold 41 franchises, with 16 pending. And it's on track to sell 150 to 200 more franchises across the country and exceed $20 million in revenue this year. "People are going to wait on buying a new car, but they're not going to cheat their kids out of a childhood birthday memory for a couple hundred bucks," David says.

And for franchisees coming from unsatisfying jobs, the Austin, Texas-based business allows them a fun lifestyle where they're greeted with enthusiasm and positivity every day. "As a franchisee, you can count on the fact that when you go to work and show up at an event, the kids are smiling and excited," says Stuart, 46. "The only complaint [we hear] is, 'Don't leave.'"