If It's Broke, Decorate It

This entrepreneur fell off her bike and into a successful business.
Next Article
Jason Daley
Magazine Contributor
June 9, 2009 2 min read 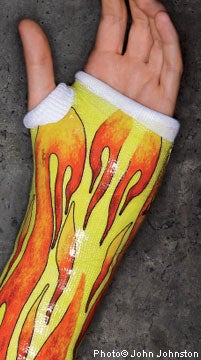 When Jess Smith pitched over the handlebars of her bicycle in 2006, she didn't think her fractured wrist, shattered toe or broken nose were worth more than a few strong painkillers. But that bone-crunching bike ride turned out to be the genesis of Casttoo, her Boulder, Colo.-based business that designs decals for casts, prosthetic limbs and knee braces.

"I painted my whole wrist cast, and when I went back to the doctor, he told me he'd never seen anything like it before," recalls Smith, now 24. "He said if someone could produce art like that for casts, he'd buy them." Less than a year later, the studio arts grad had produced the first generation of Casttoos.
The idea is simple--designs are printed on a special adhesive film that, when applied to a cast and blasted with a hairdryer for 10 seconds, melts into the texture of the plaster. Add a whole sheet of decals, and you can channel Kat Von D while you heal. Smith, aided by a full-time designer, focuses her decals on traditional tattoo subjects like flames, tribal art and animals, though she makes sure all the designs are in line with her "Happy Healing" motto.

The world has taken notice: Besides selling tens of thousands of decals, last year Casttoos entered a marketing agreement with 3M, recently began soliciting orders from the international market, and is gearing up to offer licensed sports and cartoon imagery.

"At any given time, ten percent of the population is healing from a broken bone," explains Smith. "That's a lot of misery. But the positive changes I've seen in attitude and emotion when people decorate their casts is
incredible."
loading...
More from Entrepreneur