Wine from East to West

New Englanders, Peter and Diana Merriam, were enraptured by the oenological world. 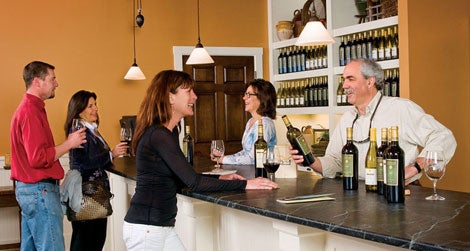 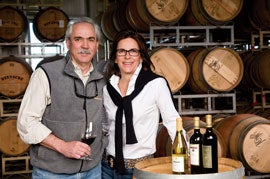 The legacy of Merriam Vineyards began on a wine-fueled honeymoon in France, where New Englanders Peter and Diana Merriam became enraptured by the oenological world. The couple was determined to someday craft wines inspired by their favorite French varietals, and after a five-year search for the perfect vineyard, their dream came true. In 2000, the Merriams acquired Wind-acre Vineyard, a spot of land that has been cultivated for grapes since the 1890s.

Windacre is located on the warmest edge of Sonoma's Russian River Valley which is ideal for resilient reds: Merlot, Cabernet Sauvignon, and Cabernet Franc. The 11-acre vineyard lies on an ancient glacial riverbed that has created complex soil compositions, making the Windacre terroir very similar to France's Bordeaux region. That parallel influenced the Merriams to purchase their vineyard, as it was the optimum location to grow Bordeaux varieties.

Since traditional red Bordeaux is made from blending, Peter promptly planted the Bordeaux classics: Cabernet Sauvignon, Cabernet Franc, and Petit Verdot. Merlot grapes had already been growing there since the 1980s. Eventually, Merriam's Bordeaux wine "Miktos" will be one of the few California blends sourced entirely from one vineyard site. Still, Merriam Vineyards maintains solid relationships with other Sonoma growers in the Dry Creek and Alexander Valleys, so that the winery can always select from the best grapes. In crafting the wines, there is little interference with the natural process. "Less-is-more" methods are traditionally applied. The barrels are racked a couple times a year, on the Bordeaux schedule, which is a labor-intensive system not often seen in New World wineries.

Recently, the Merriams purchased the nearby Los Amigos property. It has doubled their available acreage for cultivation and provided a pastoral setting for a new winery and tasting room. Los Amigos has a cooler climate than Windacre, so Peter and Diana will be able to enjoy their favorite wines, Pinot Noir and Sauvignon Blanc, respectively, as the growth of these Burgundy-style varietals begins this year. There's a worldly feel at Merriam Vineyards, where Bordeaux and Burgundy have inspired Californian wines, and the tasting room feels like a cozy New England cottage.