Where Background Noise Fears to Tread

The Jawbone Prime Bluetooth headset is even cooler than it looks. 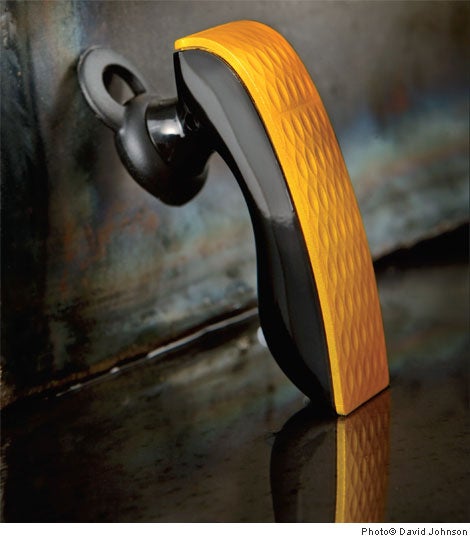 The coolest thing about the Jawbone Prime Bluetooth headset is not its sleek styling, nor its range of available "Earcandy" colors, though both of those features make it the perfect accessory to modern business armor. No, the coolest thing is the name its creator, Aliph, chose for its noise suppression technology: NoiseAssassin.

Finally, background noise--the enemy of all cell phone conversations and every Bluetooth headset up to this point--can be murdered. For anyone who has ever tried to conduct a business meeting on one line while soothing an investor on the other, all while walking elbow-to-elbow on a busy city street, it's a crime worth the time. You'll enjoy a secret thrill when the little white voice-activity sensor touches your cheek and triggers a "turbo boost" in NoiseAssassin performance (though you may want to stifle your euphoria if you're sitting on a crowded plane or in a client's conference room).

Still, for some style-conscious users, the death of noise may play second fiddle to the Jawbone Prime's unique styling. The call answer and function buttons are disguised on the headset's contoured surface. Then there are the colors: Drop Me a Lime, Frankly Scarlet, 'Yello!, and Lilac You Mean It. Maybe cutesy color names aren't your thing, but the hues will get you noticed among the bland Bluetooth armies traversing America's airports, boardrooms and sidewalks. And you know how important it is to stand out.