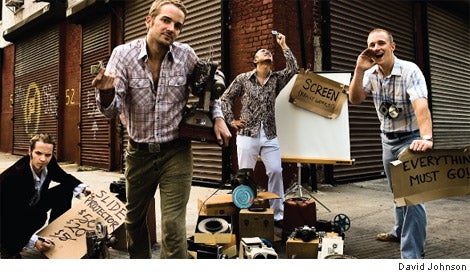 I stand in front of a sterile door so cold and lifeless that I wonder if I'm at the right place. The miniscule name to the right assures me this is, indeed, the headquarters of Animoto Productions. I soon discover the exterior's simplicity belies a comfortably casual space buzzing with entrepreneurial energy--the kind you imagine at a wildly ambitious tech startup. That's because within these four walls, a video revolution is taking place, one that promises to usher in a whole new age of video-making where anyone, regardless of talent or wealth, can create a professional-looking video. Using Animoto's video creation platform, users upload photos, select a song and click "Create Video." Minutes later and not a penny poorer, out pops a 30-second video with serious wow factor.

The web application is super cool, and so are the guys behind it: Brad Jefferson, 33; Jason Hsiao, 33; and brothers Stevie Clifton, 30, and Tom Clifton, 28. Though a few of them are self-described tech geeks--which is probably true in view of what they've created--they look anything but. They're laid-back, approachable and devoid of ego--despite the fact that they're the creators of a groundbreaking, innovative technology.

I catch them in their 1,000-square-foot office that's refreshingly free of cubicles but a little too cramped for their team of 15 employees mere weeks before they're on the move again. It's their third move since founding Animoto in August 2006. This time, they're heading to a space three times the size, just across town in New York City's West Village. Hsiao shows me the blueprints: It'll feature chain-link fences, a traditional mailbox and cool hangout areas. It will be the antithesis of corporate design--and that's just how they like it.

In the meantime, though, Jefferson, Hsiao and I find ourselves tucked away in what used to be the closet of their current office. It's the only free space to talk. I soon learn that the small, scantily padded bench I'm sitting on has served as Jefferson's bed at times and that they rent out the space from a hippie couple next door. We have to keep the door open so it doesn't get too stuffy during the interview.

"I don't know about you, but I get shown so many boring slideshows of my friends' trips," says Hsiao. "It's like 20 minutes, and you're like, 'Kill me now.'"

It was this boredom that inspired Hsiao and Stevie, who were working in TV and film production at the time, to envision much more. They identified the disparity between the low-quality videos online and the high quality of TV and film and knew they could do something about it. They also saw how digital photography is transforming the way people take photos. Once unthinkable, now it's not so unusual to snap hundreds of photos of a single event. "We kind of realized that if the ways people capture experiences are changing, then the way we share those experiences should also be evolving," says Hsiao.

The process that led from the conception of the idea to the birth of Animoto took a year and a half, and along the way, Jefferson and Tom joined in on the vision. Extensive research and development went into perfecting the Cinematic Artificial Intelligence technology that powers the video-creation process and ensures that no two videos are alike. "[The technology] takes a body of music, looks at all the nuances--like the beat, the tempo and the energy--and figures out how to juxtapose the imagery on top of that so the whole thing feels like one consolidated piece that evokes the intended emotional experience," explains Jefferson.

Since its launch in August 2007--and with funding from family, friends and Amazon.com reaching into the seven figures, as of press time--the web application hasn't disappointed. More than 300,000 users from more than 200 countries have already registered at Animoto.com , more than 2 million Facebook users have signed up since the application was introduced to the social networking site last March, and more than 4 million videos have been created. Although 30-second videos are free to users, longer videos cost $3 each.

Animoto might not have advanced if not for the perfect blending of each founder's skills and talents. "With Tom studying music, Stevie and I working in the TV and film industry here in New York, and Brad with his extensive business background, this was the only team that could do this," says Hsiao. "It perfectly leverages all our backgrounds and our relationship."

Friends since high school, they knew they were destined to do something together. And through the years, they have. While attending Dartmouth College, Jefferson, Hsiao and Stevie created the Dartmouth Interactive Directory, which was an innovative blend of Craigslist and Facebook--six years before Facebook even existed. But Animoto proved to be the ultimate venture, capturing their imaginations and bringing them together once more.

The Big Picture
For a company so grounded in technology, Animoto is blissfully free of any infrastructure. Indeed, there's not a single server to be found in the office, even though it's dependent on servers--sometimes lots of them--to operate. "I like to joke that the most expensive thing we've bought recently is a fancy espresso machine, but it's actually not even really a joke," says Hsiao. "Aside from some monitors, that's one of our few actual assets."

That's because everything, including server processing, bandwidth and storage, is handled by cloud computing, a pay-as-you-use model. So when the Animoto application launched on Facebook, causing the number of users to soar from 25,000 to 750,000 in four days and requiring the simultaneous use of 5,000 servers, business carried on as usual. "Without the ability to handle a spike like that, our business doesn't exist," says Jefferson.

Meanwhile, Animoto's buzz extends beyond social networkers. In fact, the ways in which the video-making platform has spread have even surprised its creators. From realtors to educators to businesspeople, it seems everyone has a need for high-quality videos. And the Animoto team has been quick to answer that demand, creating Animoto for Business in June ($99 for three months or $249 per year) and Animoto for Education, a presentation tool for the classroom, a month later. In addition, pet fanatics have used the technology as a tool to fully express their pet obsessions, proud fathers have made videos of their sons' Little League victories, and soldiers in Iraq have stayed in touch with their loved ones back home.

Not surprisingly, the guys at Animoto have come up with innovative uses for their own technology. Hsiao proposed to his girlfriend with an Animoto video, and Jefferson announced his baby's birth with one.

For the webware wonder that is Animoto, the story is far from over. "The ultimate vision here is we want to help users create professional-quality content," says Hsiao. "So it doesn't matter what you give us, we'll take that and put it in our magic black box, and in a couple minutes, we'll deliver something that not only looks professional, but is something you never could have dreamed of doing on your own. Today, that's images and music. Tomorrow and in the future, that can include anything you might imagine."

5 Things to Do Before You Franchise Your Business