A monk turns to printing supplies to keep his abbey afloat.

By Jennie Dorris August 19, 2009
This story appears in the September 2009 issue of Entrepreneur. Subscribe » 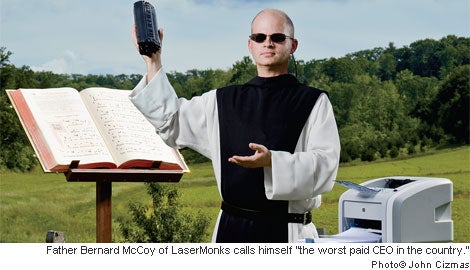 In 1995, when Father Bernard McCoy moved in to the Cistercian Abbey of Our Lady of Spring Bank in rural Sparta, Wis., he had much more to do than pray for nearly five hours a day: He needed to figure out how to earn enough money to keep the abbey going.

The abbey, which houses seven "full-time" monks, requires about $175,000 a year to operate. So McCoy, a lifelong entrepreneur, started brainstorming. He researched the traditional monk money-making methods, such as growing and selling shiitake mushrooms or cucumbers. He even looked into creating a high-end golf course on 300 acres of the abbey's property.

McCoy went through so many pages of research that his printer ran out of toner. That's when divine inspiration hit.

The cost of toner was "way too expensive for a bunch of black dust," he says. "And then I thought, if I can save money for us, there are others who can save money, too." McCoy started calling manufacturers and distributors to see if he could sell cheaper ink and toner online as a middleman. He also hooked them with a feel-good angle--any profits would go to a range of charities. It turned out that it pays to be devoted to "The Big G" (as McCoy says): Manufacturers and distributors were happy to sign with LaserMonks to gain added credibility in their socially responsible efforts.

Today, LaserMonks is an online retail business that sells toner, printer ribbons, and copier and fax supplies, as well as products from other monasteries, including preserves and dog biscuits. Oddly enough, the company's work still echoes a traditional monk pastime.

"Nine hundred years ago, my brothers were copying manuscripts and making their own paper and ink," McCoy says. "I'm doing the same thing--just a little more high-tech."

Thanks to a healthy profit margin, the monks now donate between $25,000 and $125,000 a year to charities. And despite having never taken a vow of poverty, McCoy says his life as a monk hasn't changed much, even with all the success. "We aren't hiding a Rolls or Ferrari in the barn, and we aren't wearing bling," he says. "I mean, we're still monks."