What inspires the chefs of Washington Wine Country? 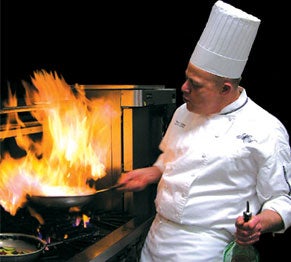 Boasting culinary resources as diverse as the Pacific Ocean, fresh flowing rivers, bogs, orchards, fields, and vineyards, it's no wonder the state of Washington is home to so many innovative chefs. Many can be found in restaurants surrounding the city of Seattle--but not all. In fact today, with some 300 wineries and vineyards located throughout the state, many innovative chefs are hanging their toques in towns like Wenatchee, Prosser, Yakima, and Walla Walla. These small towns are located in fertile areas, bursting with produce, wines, and endless culinary possibilities. When asked what inspires them, these small town chefs with big ideas all point to the same two things: the abundance of fresh produce and Washington's wines.

Chef Frank Magaña
Picazo 7 Seventeen, Prosser, 509.786.1116
(Serving seasonal dishes with a Spanish influence. Menu offers regional wine pairing suggestions.)
On local produce: Chef Frank buys about 90 percent of his summer produce from farmers he met at the local farmers' market. "They will even plant what we want in advance," Chef Frank says. "We talk to them as they're doing their second plantings, and they'll plant what we want to use in the restaurant. Together, we plan very flavor specific profiles." Often, when Frank and his staff show up for work in the morning, a bushel of produce is waiting on the restaurant's front steps. "The farmers often bring us something extra--something to play with," Frank smiles. "It's inspiring." On local wine: Chef Frank Magaña is inspired to create many dishes based on the notes he tastes in a local wine. "We tried this Roussanne and detected peach notes. So we created a dessert featuring pound cake, peaches, and then a sauce, using the Roussanne wine." Chef Frank strongly promotes drinking wine that was grown near where the food comes from. "We don't typically do white wine with white meat, red wine with red meat," he says. "We try to push the envelope. For example, we serve our paella with White Riesling. We serve our prawns with Merlot. We like to translate the wine into the plate."

Chef Bryant Bader and Pastry Chef Valerie Mudry
Whoopemuphollow Café, Waitsburg, 509.337.9000
(Serving Southern comfort food, gourmet desserts, and regional wines.)
On local produce: Celebrating his fourth year as a Wine Country chef in May, Chef Bryant Bader is also celebrating his friendships with area farmers. "There's been a good growth here," he reflects. "Tourism has grown and so has our relationship with the farmers. I love it when the local farmers bring me fresh asparagus, tomatoes, and okra." Chef Bryant admits a particular fondness for okra, which he likes to fry and serve in several dishes. His partner, Pastry Chef Valerie Mudry, relies not only on the local farmers, but friends to grow things for her. She even grows her own raspberry bushes and about ten different fruit trees in her own yard. "Talk about inspiring! I look at the peaches growing on the trees and I can almost taste them," she says. "Fresh raspberries and peaches inspire me," she exudes. "And I wouldn't be worth my pastry chef toque if I didn't say that chocolate inspires me." On local wine: Chef Valerie is also drawing inspiration from neighboring vintners. "Our local winemakers are beginning to produce their own Port wines. I take their Ports and flavor my chocolates with them. So we offer locally made Port wines with house-made chocolates, with the Port as an ingredient." 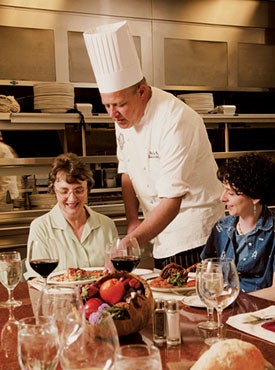 Chef Michael Kline
Creektown Café, Walla Walla, 509.522.4777
(Serving fresh, unique, seasonal cuisine and regional wines.)
On local produce: Chef Michael Kline often takes his wife and two children to nearby farms to select his vegetables. "I think that every chef dreams of this," Chef Michael says. "To be able to pick my own herbs and pull fruits right off the trees--there's nothing quite like it as far as inspiration goes." Last summer, a succulent crop of tomatoes reminded Chef Michael of childhood days in northwest Ohio and how his mother used to lightly sugar the tomatoes she'd prepare for him. He sliced some tomatoes, lightly sprinkled them with a Moscavado sugar, and burned the tops like one does for crème brûlée. Sprigs of fresh basil and goat cheese from a local fromagerie were added as a finishing touch. "We could barely keep up with the demand," Michael chuckles. "It's amazing how something so simple can be so beautiful." On local wine: Chef Michael claims to be a fledgling when it comes to wine, but he's made a point to learn. He spent a harvest season at Basel Cellars, learning all he could. Today, he often uses wine as his muse. He's particularly fond of his autumn poached pears, gently poached in a dry Riesling with cinnamon in sous vide fashion. "In the summer, I like to braise lamb shoulder in lavender, vanilla, and a red wine demi glace, fortified with fresh mint. It has come into high demand."

Chef Bear Ullman
The Marc Restaurant, Walla Walla, 509.525.2200
(Located inside the historic Marcus Whitman Hotel. Serves
creative organic Pacific Northwest cuisine and regional wine.)
On local produce: Chef Bear Ullman works very closely with local organic growers. "The organic farmers often surprise us with the tastes they deliver," he says. Chef Bear likes to work with fresh micro-greens from a tray of six or seven varieties in the kitchen. "We trim just as much as we need--when we need it." Chef Bear is also an artist, creating some 300 bowls and plates each year, for his salads and presentation pieces. On local wine: "We always start with the wines first," says Chef Bear. "For our winemaker dinners, we first sit down with the winemaker, taste the wines, and have a roundtable discussion about the pairings. A few weeks later, we bring the winemaker back to pre-taste the dinner." Eighty to ninety percent of the wines served at The Marc are local Washington wines.

4 Reasons Why Validation is Important to Your Franchise System