Honk if You Can Read This 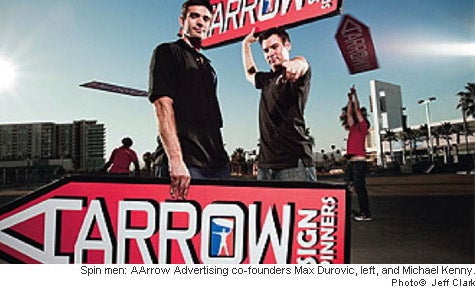 Blog ads or cable television? E-mail marketing or direct mail? When you're sizing up advertising options, don't underestimate the power of riding a big red arrow like a bucking bronco.

The best sign spinners, or "human directionals" in the lingo of the outdoor advertising industry, are equal parts clown, athlete and actor. For six hours at a stretch or more, they spin and throw their arrow-shaped signs like batons, strum them like guitars, paddle them like canoes, ride them like horses--anything to grab the attention of passersby.

Even as real estate development--the bread and butter of the human directional business--went stale, AArrow continued to grow. The company projects double-digit growth and sales of $4 million to $5 million in 2009.

Durovic still occasionally takes to the streets to spin alongside his youthful employees. "I don't necessarily tell them I am one of the founders of the company. I just go out there and set the bar," he says. "When the shift is over, I say, 'Hey, you saw me and how hard I was working today, and how much attention I got, and how much fun I had. This is what we want you to do every time you come to work.' "

Companies that hire sign spinners generally value their ability to visually break through even an ad-saturated urban setting. Spinners give temporary prime street frontage to businesses set far back in shopping centers or on a less-trafficked side street. For that, companies will pay $25 and more an hour, and competition-winning spinners have been known to command $70 or more an hour.

Suki Yamashita, account director for outdoor advertising firm Posterscope USA, said she was "blown away" by the AArrow team demonstration she saw and has hired AArrow for some of her clients. It's a niche in the outdoor ad market, she said, an alternative to permanent signs or billboards.

This form of advertising emphasizes the here and now: Pulling local traffic into a grand opening, a big sale or a special event. But that strategy works in other settings too, such as drawing attention to a booth on a crowded trade show floor, flagging down fans outside big sporting events, or even promoting political causes. Some AArrow workers, for instance, did volunteer sign spinning for Barack Obama and voter registration drives in 2008.

The startup firm greeNEWit, which performs innovative energy audits of homes and businesses, spotted AArrow at a franchising expo earlier this year. Josh Notes, chief visionary officer for the Maryland-based company, was so taken that he and greeNEWit's two other owners eventually purchased an AArrow franchise.

Extreme sign spinning gives startups an "instant cool factor," Notes said. "You can customize your ongoing marketing campaigns to your time and budget constraints," he added. "It's also mobile enough for a startup that runs out of a home office. You can advertise where you need to."

When 13-year-old Liberty Tax Service first launched, its franchises needed to draw attention away from established behemoths like H&R Block--and it only had a January-to-April 15 window to do it. In 2000, the company hired seasonal workers (a force that's grown to 10,000 a year) to dress like the Statue of Liberty and wave tax-return customers toward its 3,000 offices in North America.

Danny Hewitt, 31, Liberty's co-founder and "vice president of guerilla marketing," auditioned several companies to join his street corner campaign, going so far as to have an AArrow spinner face off with one of his human statues outside a Liberty Tax office. He too was sold and wound up with two AArrow franchises, and forged a strategic partnership with AArrow (even bringing his "VP of guerilla marketing" title along). Liberty franchisees have premium access to AArrow's spinners and training strategies, and AArrow has access to Hewitt's vast experience creating a national franchise.

Durovic is sure he can find the talent overseas. "The U.S. is good at creating job opportunities for young people, but in other countries, there just are not as many job opportunities for people between the ages of 16 and 25," he says. "I think sign spinning is going to do even better over there than it does here."