I'll Have My Avatar Call Your Avatar

With Protosphere software, it's possible to have a meeting without actually...meeting.
Next Article 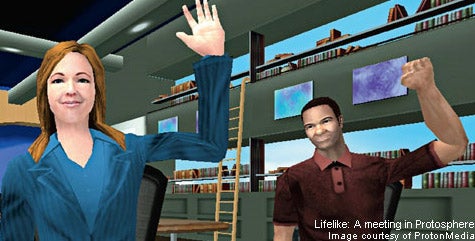 Maybe it was inevitable: Avatars already rule the video game world. They're taking over Facebook profile pages. They even have their own blockbuster movie ("Avatar," as if we needed to tell you).

And now avatars are taking meetings.

ProtonMedia , a Pennsylvania software developer, has unleashed a product called Protosphere--a multi-user program that allows you to create what the company calls a "teaming environment." In other words, you and your co-workers build your own avatars, then gather to have on-screen meetings in private conference rooms, art galleries, auditoriums--whatever virtual environment feels right.

Unlike teleconferencing--so last year!--Protosphere gives everyone face time, without having to deal with actual face.

"At first glance, people think this is a 3-D videogame with avatars, but that's only the sexy skin," says Ron Burns, ProtonMedia's founder and CEO.

Indeed, Protosphere has recently gained serious traction among major companies. Boeing, Chevron and Johnson & Johnson are just a few of those using the program to connect employees in far-flung offices.

Or, surprisingly often, to connect employees in the same office--which makes it quite possible that there are people walking around the Johnson & Johnson building who only know one another as avatars.

At least they're accurate: There are hundreds of ways to customize a Protosphere avatar: First choose a head shape, skin and eye color, nose and other facial features, body type and hairstyle. Sport jeans and a tee for a casual networking event, or change into a pantsuit for that important meeting with the boss.

Talking is as easy as clicking the speak button--no need to dial a phone or schedule a call. Users can also chat using instant messaging, and comments can be shared publicly or privately. Want someone to know you're in a hurry? Command your avatar to glance at her watch--that should send the message.

A free demo is available at ProtonMedia.com , though each company's virtual world is custom built. The program ranges from $250 to $1,000 per user.

"Protosphere is meant to give context to content," Burns says, "to humanize the massive layer of data that businesses swim in everyday."

By taking out the humans, of course.