By Jason Daley October 21, 2009
This story appears in the November 2009 issue of Entrepreneur. Subscribe » 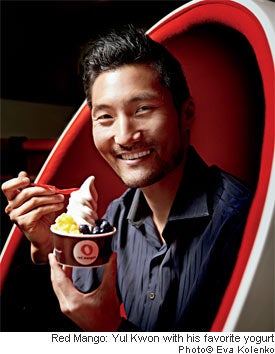 In 2006, Yul Kwon, a 34-year-old attorney and Google management consultant, won Survivor: Cook Islands, picking up a $1 million payday and a spot on People magazine's sexiest men list. He also dropped 20 pounds, but that starvation-honed physique didn't last long. Back on the mainland, Kwon developed a mammoth appetite and routinely devoured the bulk junk-food aisles at Costco. Forty pounds into his binge, he decided enough was enough.

"I wanted to find something healthy that wouldn't kill my body," he says. What he discovered was Red Mango, a stylish chain of premium frozen yogurt shops and one of the new wave of franchises serving up this all-natural, non-fat, live-culture "treat"--and inspiring long lines, intense rivalries and endless knockoffs across the U.S. Although several fro-yo shops make the claim of being first, it appears that Red Mango originated the concept in South Korea in 2002, then opened its first U.S. outpost in Westwood, Calif., five years later. More than 60 locations have followed, with plans for dozens more in the coming year.