Business Unusual: The Tailgater in Your Living Room

What if there was a service to match rabid sports fans with home owners across the country?

By Geoff Williams November 13, 2009
This story appears in the December 2009 issue of Entrepreneur. Subscribe » 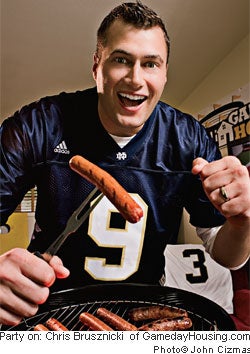 It sounds like an idea hatched over an alumni weekend, after more than a few beers: What if there was a housing network just for college football fans? A service that would match up all those rabid Wildcats, Bulldogs, Warriors and Cougars with flat-screen-equipped, Jacuzzi-tubbed homeowners across the country?

Now there's a party in the making--and the concept behind Gameday Housing, an online brokerage run by three Notre Dame alumni. It all started a few years ago, when Geoffrey Polk, a 28-year-old Chicago tax attorney, bought a second home in South Bend, Ind., for the sole purpose of watching his beloved Fighting Irish. Soon, he was renting it to other fans too.