Recession? What recession? Not for professional Santas.

By Kara Ohngren Prior November 13, 2009
This story appears in the December 2009 issue of Entrepreneur. Subscribe » 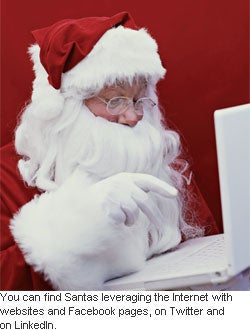 In a retail season where all indicators are down, one is pointing up: Professional Santas are busier than ever.

In fact, the Amalgamated Order of Real Bearded Santas (we're not making that up), a 15-year-old organization of 700 white-bearded gentlemen, reports that both 2008 and 2009 have been terrific years for ol' St. Nick. Last year, many of the group's Santas reported record earmings, with average hourly rates up 25 percent from a couple of years ago.

Kennison Kyle, a Memphis, Tenn.-based Santa, said 2008 was "one of my best years, since I first put on the red suit 11 years ago."

The recession has been a boon for Santas for a few reasons--foremost, analysts say, they really do draw traffic into stores.

"Developers have recognized a need to migrate from being landlords to being 'placemakers,' " says Paco Underhill, founder and CEO of Envirosell, a New York City retail research and consulting firm. "They need to give their customers a reason other than shopping to come to their stores. In particular, suburban America goes to shopping malls to look at people and whether you're standing in line for Santa or watching a fashion show, that's an excuse to look at each other."

However, the news isn't all good: Those second-tier Santas, the fake-bearded fellows who populate shopping malls, are working more but being paid less. Mall Santas can expect about $8,000 for the five-week season, retail groups report, down from around $15,000 several years ago. More deluxe, house-call Santas pull down $125 to $350 an hour.

But pros know how to hustle. You can find Santas leveraging the Internet with websites and Facebook pages, on Twitter (@SantaClaus--"I won't be insulted if you follow @NotSanta") and on LinkedIn. Santa is also quite the prolific blogger (see "periodic updates from the North Pole" at clauschronicles.blogspot.com).