A New Approach With the Old Guard

To reinvent direct mail, Zumbox brought in a veteran who delivered $8 million in big-name investment.
Next Article 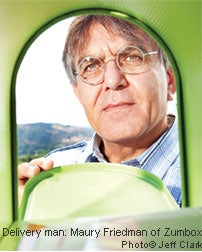 When serial entrepreneur Maury Friedman set out to use disruptive technology to push the direct-mail industry in a new direction, he knew only the most experienced leadership would attract the level of investment required. He landed on CEO Donn Rappaport, a prominent figure in the direct-marketing industry who is founder of 30-year-old market-research firm ALC as well as a former chairman of the Direct Marketing Association.

Friedman's big idea was Zumbox, a 2-year-old startup based in Westlake Village, Calif. The company's technology creates a corresponding digital mailbox for every street address, letting companies that rely on direct mail use digital file delivery to save on postage--and relieving consumers from mountains of mail and wasted paper.

While Friedman himself is no stranger to big investment and big entrepreneurial success--he sold Academy123 to Discovery Education parent Discovery Holding Co. in 2006--he knew he needed specific expertise to attract the big funding he needed to get Zumbox off the ground.

"Sometimes the original founder stays in the CEO position too long," Friedman says. "We got a huge boost to our ability to execute our business plan by adding Donn."

A decision was made early on to target individual investors rather than venture capital firms, Friedman says, because Zumbox wanted not just money to expand its successful pilot test to more markets but also board expertise in two key areas: how to gain consumer acceptance of its radical new approach and how to persuade major corporations to use Zumbox for their customer mailings.

The company tapped all its management and board connections to assemble its investor dream team. Board member Bilger proved to be a key figure, both investing in Zumbox himself and providing an introduction to Eisner and Guthy.

Rappaport knew Fresh Direct's Braddock from another mutual startup investment. But when it came time to close the deal with Braddock, Bilger's ownership of a second home near Aspen made him a natural to drop by Braddock's Aspen place to chat him up, offering documents in hand. One of the Zumbox features Braddock liked is that a customer's Zumbox travels with him, allowing him to pick up mail from any Internet connection.

"I view the internet as a very transformative vehicle," Braddock says. "And this can change people's whole experience of receiving mail. The opportunity is obviously massive."

Friedman says targeting individual investors took longer, but he's glad he went that route. "We wanted to create a network of very well-connected individuals who can help us strategically," he says. "Mike Eisner has already been a great contributor to our thinking, and in providing introductions."