By Jennifer Wang November 13, 2009
This story appears in the December 2009 issue of Entrepreneur. Subscribe » 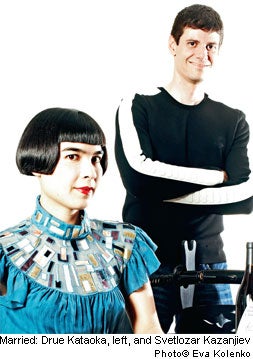 Venture capitalists are playing Scrooge. Banks have locked their vaults. Even successful business owners are scrambling for cash.

A startup today needs a new strategy when it comes to raising cash. And Drue Kataoka and Svetlozar Kazanjiev have come up with one: Matrimony.

When the Palo Alto, Calif., couple got engaged last year, they came up with the brilliantly cheeky idea of tapping their wedding guests as funding sources. They dubbed the project "The World's First Startup Registry" and researched exactly what it would take to get their tech company, Aboomba, off the ground.

"We wanted to make sure our guests were part of both important ventures that we are embarking on," Kazanjiev says. "And we leveraged the wedding and brought a lot of people in the [Silicon] Valley to create buzz and excitement around Aboomba."

Indeed, Kazanjiev and Kataoka, two Stanford grads with deep connections in the tech world, engineered their nuptials as if it were a serious business plan.

On the guest list: Venture capitalist Tim Draper, Bill Fenwick, co-founder of Fenwick & West LLP, one of the area's leading law firms, plus a coterie of the Valley's engineering and academic elite.

On the wedding website: A video of Kataoka, 31, an artist and blogger at ValleyZen, and Kazanjiev, 32, a tech entrepreneur. "Our registry is simple," he says, "and powered by PayPal."

The wedding announcement? Forget the society page. Kataoka hit the press circuit, landing coverage on local television and newspapers, and scads of blog entries on sites such as Gawker and NYTimes.com.

Soon, the list went viral, and people who weren't invited were inspired to give. Amazon Web Services offered a week of cloud hosting, a VC asked them to lunch and an entrepreneurship group, TiE Silicon Valley, threw them a fancy reception.

Kataoka and Kazanjiev tied the knot in Stanford in August, and they report it was in all ways a success: They got every item on their registry at least three times over--particularly impressive considering they've said almost nothing about what Aboomba will actually do once it launches next year.

"It's a platform that will empower entrepreneurship," Kazanjiev says. "We don't want the idea to leak out."

Draper, who gave a toast at the event (and bought the viral warfare item), didn't mind being tapped for cash. "I would rather people raise money for a startup than to end up with toasters and demitasse cups they don't need."

As for the honeymoon? There wasn't one, of course. The newlyweds have a business to launch.