Former Navy SEAL Randy Hetrick stitched together a gizmo that turned into a $20 million business.
Next Article Add to Queue
January 14, 2010 3 min read 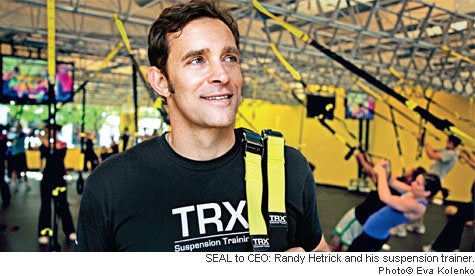 Of all the testosterone-fueled lessons Randy Hetrick learned as a super-buff Navy SEAL, the one that launched him into the business world was this: Sewing.

Frogmen, he says, learned to stitch so they could modify standard-issue gear for clandestine missions. So about 20 years ago, when Hetrick was in Southeast Asia and looking for a way to train, he stitched parachute webbing into straps that he could fasten to a door and use as a pulley device. He got a workout similar to weightlifting, but instead of pumping iron, he was using his own body weight as resistance.

When he returned from Asia, he asked a Navy rigger to make a better version, and "the gizmo," as the frogmen called it, became so popular that other SEALs started sewing their own to take on missions.

"I thought this was a damn commando tool, pure and simple," says Hetrick. "Man, was I wrong."

In fact, it was just the beginning of total resistance exercise--or TRX--and Hetrick's $20-million business, Fitness Anywhere . The centerpiece product--the TRX Suspension Trainer, as the gizmo is now called--costs $150 to $200, and is one of the newest technological advancements in high-end workouts. It's used by superstars such as New Orleans Saints quarterback Drew Brees and Olympic swimmer Michael Phelps. The portable device clasps to doors or trees, and users get intense total-body workouts by following simple, sport-specific instructional videos.

Hetrick's transition from SEAL to CEO began when he left the Navy six years ago and went for an MBA at Stanford University. The school's athletic trainers fussed over the strap when Hetrick brought it to the gym, and he decided to devote his time at Stanford to building a business model. After earning his degree, Hetrick bought a used sewing machine for 50 bucks and sewed up a prototype in his San Francisco apartment. Then he moved with a few employees to a cramped space nearby.

"I wanted to re-create the SEAL team environment--the small, flat, high-performance, big boy rules kind of culture," he says, sitting on a balance ball in his new office. His corporate attire consists of workout shorts, nylon T-shirt and sleek training shoes. Not a bad get-up, considering half his staff is downstairs bending and twisting in the office's street-level gym.

Hetrick, who has the elastic physicality of a gymnast, usually joins the daily sweat fest. But he recently tore a shoulder muscle during production of a training video with mixed martial artist Brandon "The Truth" Vera. As a result, he had to forgo the lunchtime workout at the company's 12,000-square-foot office in San Francisco's Russian Hill--a place that thrums with the hip vibe of a Silicon Valley startup.

"Working out is not only sanctioned," Hetrick says, "it almost is required."