The Computer vs. the Cool Girl

Resale is hot in this economy, which is why there's a franchise for hip new threads. But can you really program that judgy girl behind the counter?
Next Article Add to Queue

The greatest hand-me-down from the weak economy just might be the resale shop. Sales in second-hand stores leaped $223.3 million last year, according to market research--that's a 31 percent jump in business, when the rest of retail is foundering.

The trend caught Shauna Sloan's attention, and in 2009, she expanded her children's retail franchise operation, Kid to Kid, to include a hip resale exchange called Uptown Cheapskate. Stores in Salt Lake City and Greensboro, N.C., are already up and running, and four more are slated to open this year. "Our stores are doing wonderfully in the recession," Sloan says. "People are now proud of finding deals--it's in vogue to be thrifty."

Yes, but we had to wonder: Every successful resale shop comes down to one factor--that intimidating cool girl behind the counter, who eyes your old Marc Jacobs jacket and denim mini, passes terrible judgment and builds the inventory (and identity) of the store right on the spot. Could Sloan have truly developed a computer program that appraises clothes, shoes and accessories based on style, brand, condition and what's already in the store?

We decided to put it to the test, offering up three items for resale, first to Uptown Cheapskate, and then to the Costa Mesa, Calif., branch of Buffalo Exchange, the hip vintage chain.

The results were a little frightening: On two items, the computer and the girl--a blonde sporting an oversized plaid shirt perfectly cinched around her tiny waist--were a penny apart. On the third, the hipster chick was pickier. "Super cute--I totally love it," she said, right before rejecting it completely. 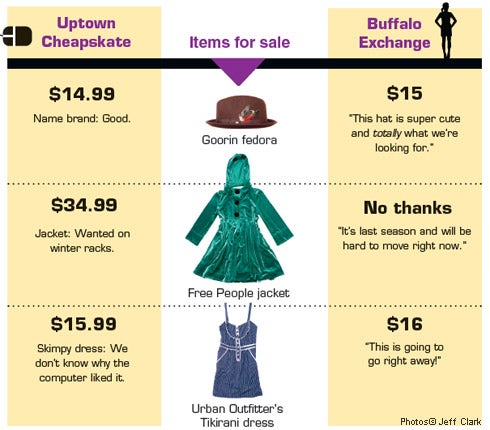