Cars, tables, massive sculptures--you name it, John Thomson will have it rotating in no time.
Next Article Add to Queue
January 18, 2010 3 min read 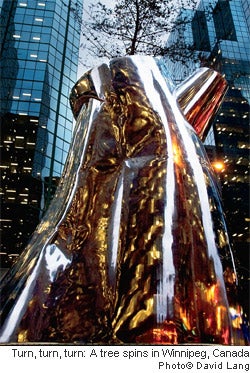 A treacherous 200-foot driveway, a $750,000 garage and one too many busted rearview mirrors drove John Thomson into major problem-solving mode.

Back in 2004, Thomson was a successful bond trader in Los Angeles when he built a lavish combination garage, guest house, wine cellar and media room. It was nicknamed the "Garage Mahal," but it had near-fatal flaws: Thomson couldn't get his car out of it without moving his wife's car, and his wife couldn't back out without bashing a mirror or two.

Thomson turned to the internet and searched "difficult parking solutions." There he discovered a simple but revolutionary idea: Turntables.

Auto shows have used them for years to spin concept cars, and heavy industries like them for reversing trucks or locomotives in tight spaces. Thomson found a New Zealand company that could deliver a residential turntable, but for the painful price of $40,000. Worse, he discovered after it was installed that the thing was noisy and prone to problems.

It did, however, nicely rotate his wife's beefy Suburban to negotiate the driveway accident-free. The mechanical, slightly obsessive Thomson still wasn't satisfied, so he and his brother began to search for the ultimate car carousel.

Thomson also spotted an opportunity. "I knew if I could find the right product, I could satisfy my entrepreneurial heart, too," he says.

He liked the carousels from a Chinese manufacturer, the Weizhong Revolving Machinery Co., Ltd. He just needed to see one.

"Instead of paying to travel to China, I bought a carousel from them," he says. Thomson, who loves restoring cars and complex mechanical projects, promptly redesigned the device and improved it with Weizhong's input.

While trading bonds from 5:30 a.m. to 2 p.m., he plunged into learning the turntable business. Soon, Weizhong signed him as its sole U.S. installer and distributor. And five years ago, he launched Carousel USA in Monrovia, Calif., to build, design and install his custom turntables.

With only a Google ad to get the word out, he's been surprised by the projects that have come his way. In Winnipeg, Canada, one of his turntables rotates a live tree atop a giant teapot sculpture. In Aspen, Colo., a homeowner installed one to pivot the dining room table (who knows why?). A top-secret theme park project will use several to give a new ride its special effects.

Thomson planned to run Carousel as a side business until he retired--a 10-year timeline. The wheels turned more quickly, however. "I thought we'd sell eight in our first year," he says. "We sold eight in our first few months." Even during the economic downturn, Thomson's sales increased by 50 percent, to $1.65 million in 2009.

His turntables can be built to nearly any size and with surfaces that match their surroundings. Residential versions start at $25,000, including shipping and installation. But the majority are used commercially, such as the heavy-duty model he's installing in the Trump International Hotel and Tower in Toronto to help reduce the size of a loading dock.

Now Thomson manages a staff of eight, a warehouse, a workshop packed full of complex machinery and $500,000 in inventory. And early last year, he launched a revolution of his own: He quit his Wall Street gig to run Carousel USA full time.