Allowing the natural flavors of the ample land to dominate their wines, Curtis Winery prides itself on creating wines like no other.
Next Article Add to Queue
January 27, 2010 3 min read
Brought to you by Touring and Tasting

Pioneering local vintners Brooks and Kate Firestone established Curtis Winery in 1995 as one of California's first wineries dedicated exclusively to the production of Rhône-style wines, including Syrah, Grenache, and Viognier. Since then, Winemaker Chuck Carlson has been consistently crafting rich artisan wines that capture all the complexity and beauty of the Santa Ynez Valley. 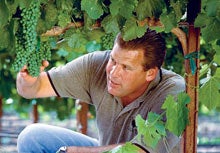 Inspired by the rolling, rugged terroir of the winery's home, Chuck allows the natural flavors of the land to dominate his fruit-forward bottlings. "My approach is to work with--not against--what Mother Nature gives us," explains Chuck, who has been making local Rhône-style wines for over two decades. "We are blessed to have vineyards that produce incredible fruit, and that's why I want the inherent flavors to really stand out and define the wine."

The wines of Curtis Winery hail mainly from the winery's estate vineyards in the Santa Ynez Valley, with select contributions from other local standout vineyards. Here, a sunny Mediterranean climate is tempered by marine breezes from the nearby coastline, creating optimal growing conditions for Rhône varietals.

The Curtis Winery facility was originally built in the early 1980s as an agricultural storage facility but was soon converted into an art gallery by renowned television producer and art buff Douglas Cramer. Today, art of a different kind is being created inside the facility, and Chuck is a veritable Picasso when it comes to his craft.

Wine tourers are invited to taste all of Curtis Winery's superb varietals at its picturesque tasting room. The recently expanded tasting room extends into the winery cellar, where guests can enjoy the ambiance of French oak barrels, as well as Vicard 40-hectaliter oak upright tanks used to age select lots. The property is the perfect setting for a wine country picnic beneath the shade of a great oak encirclement. After a day of tasting on this exquisite property, one will never want to leave.

Getting There:
Take Hwy 101 to Zaca Station Rd/Hwy 154 and head east at the stop sign (2.5 miles). Winery is on the left, on the corner of Foxen Canyon and Zaca Station.