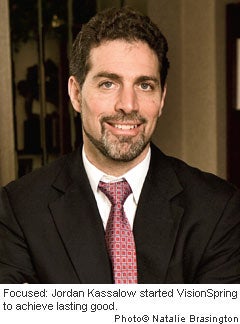 Jordan Kassalow's story starts with 20 chickens. While doing aid work in Mexico in the mid 1980s, the New York optometrist noticed a woman clutching a book while standing in line. When she reached Kassalow, she told him all she wanted was to read her Bible, which she hadn't been able to do for the past decade.

Kassalow gave her a simple pair of +2.50 reading glasses. The 52-year-old woman perched them on her nose, took one look at her Bible and fell to her knees, crying and clutching Jordan's legs. The next day, she brought him 20 chickens, a huge sum, as thanks.

"I thought, 'My God, what an impact,'" Kassalow says. "From AIDS to tuberculosis, glasses are at the end of the list when it comes to medical aid. But losing eyesight is a silent robber of economic productivity. Hundreds of millions of poor people lose their livelihood in their prime working years."

This and other experiences like it led him and a partner in 2001 to found the Scojo New York reading glass company and the Scojo Foundation. The idea was simple--he'd use 5 percent of the profits from Scojo's high-end reading glasses to fund the foundation, which would distribute reading glasses throughout the world where people live on less than $4 a day, in particular India, Guatemala and Ghana. But he wanted to create a model that was replicable and scalable--and, most important, one that could raise the long-term awareness of the problem. So he chose the microfranchising option.

"We saw the problem as huge market failure," Kassalow says. "Other strategies that are not market-based weren't going to make a dent in the problem. It's not really sustainable to just fly into an area for a few weeks and hand out glasses."

Microfranchising works essentially like any franchise system. A locally based franchise partner--usually a local NGO or corporation with a strong local presence, signs up "vision entrepreneurs," 95 percent of whom are women, who receive a "business in a bag" including glasses, eye charts and three days of training. They then travel from village to village marketing and selling the reading glasses for what typically amounts to 10 percent of a month's salary. It's a win-win-win situation--the franchisors put back whatever revenues they get from consignment sales to fund more entrepreneurs; the sellers create a viable livelihood; and workers in remote villages have access to glasses that might not reach them otherwise.

Two years ago, Kassalow sold Scojo New York, changed the name of his foundation to VisionSpring and began scaling up the foundation. In each of the last five years, VisionSpring has doubled the number of glasses distributed: in 2009 it was more than 200,000 pairs in eight countries; the company expects to sell 500,000 this year. Recently, the foundation began a program in South Africa and signed an agreement with the NGO BRAC, which will add 80,000 vision entrepreneurs in Bangladesh over the next four years. The goal is that the glasses will help prevent families from slipping into new cycles of poverty.

"When people's vision starts to fade in their early 40s, and their quality of work fades, it becomes a negative spiral at a time when they're the economic heart of their community," Kassalow says. "Our partners understand that these glasses can double people's working lives and create new livelihoods. This is a really powerful product."

4 Tips for Turning Connecting into Investors

3 Retail Stocks to Watch This Week