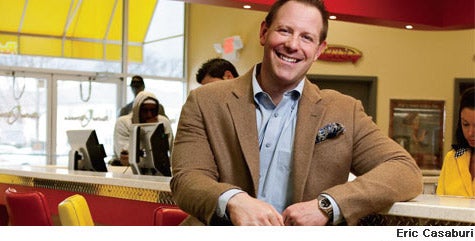 It was the decade that wrapped itself in Spandex, pulled on pink leg warmers without irony and felt the burn with Jane Fonda and Richard Simmons.

And now, the '80s are fueling yet another fitness craze: Retrofitness --Eric Casaburi's chain of 1980s theme gyms. In just five years, the New Jersey-based franchisor has sprouted 54 clubs on the East Coast.

"Nostalgia for the 1980s has never disappeared," says Casaburi, 35. And let's face it, neither has the ridiculous fun of hair bands and Sixteen Candles. Retrofitness gyms tap into all of that, with Retro Cardio Movie Theaters, RetroBlends juice bars, tanning booths, Rubik's cubes at the front desk, loud red and yellow weight machines, an 867-5309 phone number (hello, Jenny!) and, of course, a solid '80s soundtrack.

The result: While other gyms are struggling to hang on to members, Retrofitness is expanding--85 more are in the pipeline, and Casaburi hopes to reach 300 gyms in three years.

"If you keep people entertained," he says, "they don't mind the sweat."

How did you hit on this concept?
I had owned two other licensed fitness centers, and I wasn't happy with how they were operated. So I spent a couple of nights sitting in a rocking chair, jotting down notes. I felt there was a niche for a low-cost provider that gave a high-end experience. I did the raw math and figured I could be better and attract more customers at $19.99 a month than clubs charging $39 or $49 a month. I could build a cheap gym where you didn't need a tetanus shot when you left.

Was it a hard sell?
I was all about putting on a show--but vendors bought into my pitch and they sold me equipment at a much higher discount rate. I laugh now because I exceeded even what I told them. I said we'd have 10 clubs the first year; we had 15. I said 30 in Year 2, and we had 40.

Why the '80s?
We knew Generation X would be a big part of our customer base. I thought, "How can we attract and entertain them?" Eighties movies and '80s music just make you feel good; when you drop a marketing piece with an Atari joystick on it or Vans sneakers, people say, "I remember that." And actually, even younger people listen to hair bands. I have kids I coach on a football team who told me they're going to a Whitesnake concert!

Don't people get sick of the '80s?
We keep it interesting and drop in current tunes and movies all the time. But there's so much stuff from the '80s, you don't ever have to see a repeat.

Are you really obsessed with this decade or is it just a gimmick?
Oh yeah, I lived it. I grew up during all this awesome pop culture. My iPod is all Poison, Bon Jovi, old U2, old-school rap. I constantly watch '80s movies. My wife and I watched Big last week, then we watched it again with the kids last night. Everything we do in our gyms, I do in my house.