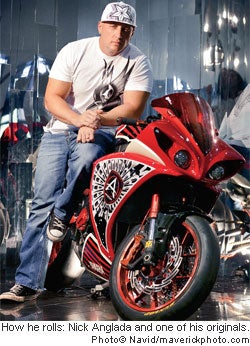 Like most young guys who ride sport bikes, Nick Anglada was just looking for a fast, fun way to get around town.

But after he bought a banged-up old Suzuki GSX-R, he became possessed by a strange creative impulse: First he applied pinstripes over the bike's stock paint, then he started chroming pretty much everything else--the engine cover, wheels, swingarm, frame, you name it.

Soon Anglada was riding a full-on, countercultural expression of his own, over-the-top individualism--the kind of thing bearded dudes on choppers do, not young guys on "crotch rockets." But as he sped around Dallas on his blinged-out "Gixxer," he discovered that he'd tapped into a secret desire among young men with a need for speed: They too wanted to be different. They too wanted attention. And he could sell it to them.

He chromed parts for other bikers, then started customizing entire motorcycles for higher and higher commissions. Almost immediately, he quit his not-so-exciting job at a pager company.

"Every day I would wait for UPS to show up, so I could open all the boxes of parts customers wanted chromed," says Anglada, who now lives in Winter Garden, Fla. "That's what fueled the business."

Ultimately he rode the customization craze to a $2-million business, creating $25,000 to $100,000 bikes for celebrities such as Blink-182's Travis Barker and landing on the covers of dozens of motorcycle magazines.

For 12 heady years, Anglada built bikes such as the Mad Science, with its metallic rainbow rims and elaborate amoeba paint work, and the Ken Griffey Jr., with a glowing gas tank that doubles as a showcase for three autographed baseballs. Then the recession hit, and the motorcycle customization business went, frankly, into the toilet.

So Anglada made a second brilliant maneuver after realizing that instead of selling look-at-me bikes to individual customers, he could sell the look-at-me factor to corporate buyers.

Now his company, Nick Anglada Originals, customizes bikes for motorcycle and motorcycle parts manufacturers who know Anglada creations get attention, whether it's on display at a busy motorcycle show or in the pages of a glossy motorcycle magazine. And he is now in the business of indirect advertising--a valuable thing when traditional advertising isn't reaching the predominantly young male buyers of sport bikes.

"I'm taking what I've been doing for the past 10 years and offering it as a medium to brand other companies in the motor sports industries," he says. Kind of a twisty way of saying that he may have started his motorcycle career riding a Gixxer, but now Anglada is riding in a different sort of fast lane.