Time is Money--Make it Count

The new Bring TIM! meeting cost calculator is making the world more efficient, one office at a time.

By Jennifer Wang April 14, 2010
This story appears in the May 2010 issue of Entrepreneur. Subscribe » 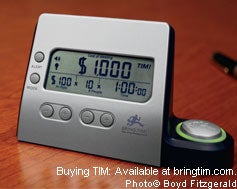 Just how precious? Figure it out with the Bring TIM! Meeting Cost Calculator and Clock, which tracks how much money is wasted during unproductive business meetings. Just put TIM on the table--a clock that displays the cost of every second of a meeting in progress, based on the number of attendees and their average wages--and watch the dollars pile up.

Victory Enterprises, a political and corporate consulting firm in Davenport, Iowa, uses the device in staff meetings and--in a blow to office socializing--keeps the clock running afterward, too.

"It's a reminder," CEO Steve Grubbs says, "that the work clock keeps ticking even after the meeting ends."

TIM is so powerful, says Christine Gosney, vice president of product development, you don't even need to turn it on: "We have two of them, just sitting in our conference rooms, and it makes us more conscious of what we're doing."

Brad Johnson, Bring TIM! creator and survivor of painful four-hour meetings, acknowledges the gag gift potential but adds that "it's also a productivity tool that's so simple it works."